Facing Władysław Łokietek’s monument, look to the right. At the end of the street, you can see a square. Since the middle ages it was the local market square. Let’s go there. There is a column with a monument of St. Szymon in the centre of the square. The city’s coat of arms is presented at the foot of the column. When you turn your back to it, you will see what remains from the medieval architecture of Lipnica. Slightly to the left stands the house of Starosta, or the governor of Lipnica, built from sandstone, which was a popular material in the middle ages. The builders used stones obtained from the debris of the city walls.
Although since the beginning of the 15th century Lipnica was called Murowana, that is masoned, due to its architecture, it is worth noting that the vast majority of the oldest buildings (apart from churches, defensive walls and the manor house) was built of wood. It consisted of minor one-storey log houses with whitewashed or timbered walls, the most handsome of which surrounded the square. These houses had deep arcades supported by massive pillars. They thus formed long communication routes around the square.
However, the oldest buildings in Lipnica preserved until today were built in the first half of the 19th century, because the former development was almost completely destroyed in a fire in 1828. The citizens rebuilt the burnt houses in an almost unchanged shape. The masonry arcaded governor’s house standing in the north west corner of the square and built in 1685 is a good example of that reconstruction.

A nearby building, just at the street, houses the famous traditional ice cream parlour “u Szymona”, which attracts gourmands not only from Lipnica, but also from the neighbouring Bochnia and even from Cracow.

From among 15 wooden arcaded houses only one has been preserved in its original structure and form. It stands in the western part of the northern frontage of the square. Built in 1848, it is probably the oldest wooden house of the type in the Małopolska Region.

It represents a wooden construction characteristic for the development of Lipnica, in which only the cellar vaults were made of stone. Take a look at the beams that support the ceiling and the deep arcade with three decoratively carved wooden pillars. This house was rebuilt in 2011, but elements of the previous architecture were preserved.

There is a reminder of the great fire of 1828 in the shape of the statue of St. Florian, the patron of firefighters, raised at the spot where the square of the new city was planned to be located. The saint was supposed to protect the city from fires. The historical figure stands on a plinth, which features a relief depicting King Casimir III the Great. It was founded by the inheritor of the Lipnica estate, Kazimierz Bzowski. The inscription on the plinth reads as follows: “To commemorate the establishment of this square, 1837”. Eventually, the new city was not built, but part of the municipality of Lipnica Dolna kept the name Nowe Miasto (which means a new city).

Lipnica – a city of merchants

Standing on the square in Lipnica, let’s imagine what this place could have looked like on a typical trading day. We are surrounded by the hubbub of talks between the inhabitants and the arrivals, the scents of products for sale and the creak of merchants’ carts filled with whatever they sell. The Lipnica square was not only a marketplace. It also hosted all city celebrations, including trials held by the public court.

Fairs and markets were an important element of the life of Lipnica and its inhabitants. Privileges concerning the organization of trade on the square were granted to the city together with the location charter in 1326. They contributed to the intense development of trade and craft in the whole region. It should be noted that medieval fairs often lasted several to over a dozen days, because people’s mobility was much more restrained than today. In these terms, Lipnica was a special city because it had the privilege to organize as many as four fairs a year: two were allowed by the location charter, and further two were added by King John III Sobieski in 1684.

It is particularly important that the inhabitants of the city also received the right to launch butcheries, stalls for shoemakers and bakers, as well as to build mills and cultivate fish.

Additionally, Lipnica also obtained the favourable staple right, which obliged merchants travelling through via Lipnica to display their goods for sale, for which they were properly charged by the city.

The singularity of trade spectacles that took place in Lipnica on trading days was remembered and passed on in many legends and tales.

Unfortunately, the events of the 18th and 19th centuries related to the gradual loss of independence by Poland had an adverse effect on the further development of Lipnica Murowana, which found itself on the outskirts of the Austrian Empire. The year 1846 was particularly severe for the citizens. The city was repeatedly flooded and suffered from crop failures, which led to the outburst of an epidemy that decimated the population. Further devastation was brought on by the I World War, during which Lipnica became the arena of fierce fights.
The splendour of this mercantile city has been impossible to return after Poland regained independence and consequently Lipnica lost its town privileges in 1934.
It should be emphasised, however, that the inhabitants tried to preserve the trading tradition in Lipnica Murowana. And they eventually succeeded, although nowadays trade is here conducted on a much smaller scale. The largest fair is held on Palm Sunday, accompanying the Lipnica competition of Easter Palms and Artistic Handicraft. Traditionally prepared food products and hand-made goods prevail during the fair. It is quite popular both among the locals and tourists coming to it from all over Poland.

Lipnica – a city of palms

It has been almost 60 years that Lipnica revives with a feast of colours of locally hand-made Easter Palms, which are often taller than St. Szymon’s monument of the main square. According to a popular verse, with his finger will Szymon point which of the palms does he anoint, thus indicating the tallest palm and the winner of the competition. Every year, thousands of guests from all over Poland come to cheer on the competitors striving to put their Easter palms in a standing position on the square, and then to honour the winner.

The custom of making Easter palms is one the oldest in Lipnica Murowana. It is passed down from generation to generation in all local families. The palms are usually thin enough to fit in a hand. They are traditionally made of wicker sticks and tied with withe every 20—30 cm, depending on the palm’s height. Their tops are decorated with multicolour ribbons and pussy willows.

Formerly, a palm’s height reflected the size of a household and the wealth of its maker. Householders made the palms because their work on Palm Sunday was supposed to bring them luck and good harvest in the coming year. According to a local belief, the palms were supposed to protect their makers and their crop from diseases and plagues. Having no palm was considered a bad omen and an uncertain fortune for the next year.

In 1958, a poet from Lipnica, Józef Piotrowski, decided to organize the first Easter Palm competition to revive the disappearing handicraft skills among the inhabitants of Lipnica. The aim of the competition was to select the tallest palm. The competition was welcomed by the locals with huge interest and its popularity increases year by year. It developed from a minor local event to an all-Poland phenomenon that attracts tourists not only from all over the country, but ever more often also from abroad.

The typical height of the palms is around 25 meters. The tallest palm ever made was prepared by a multiple winner, Zbigniew Urbański, whose work in 2015 measured 39 meters and 40 cm. It should be noted that a palm entering the competition needs to be set in a vertical position with human hands, ropes and supporting sticks only. The use of any lifts or cranes is forbidden. Only the tallest palms may lean against a tree to which the base of the palm is tied for security purposes.

Today, the competition is organized by the Municipal Cultural Centre, which cultivates this tradition preparing plenty of workshops, exhibitions and meetings dedicated to the Lipnica palms each year.
On the competition day, there is a number of accompanying events: artistic performances, tasting of regional delicacies, and exhibitions displaying the works of folk artists, which make Palm Sunday a major festivity in Lipnica. 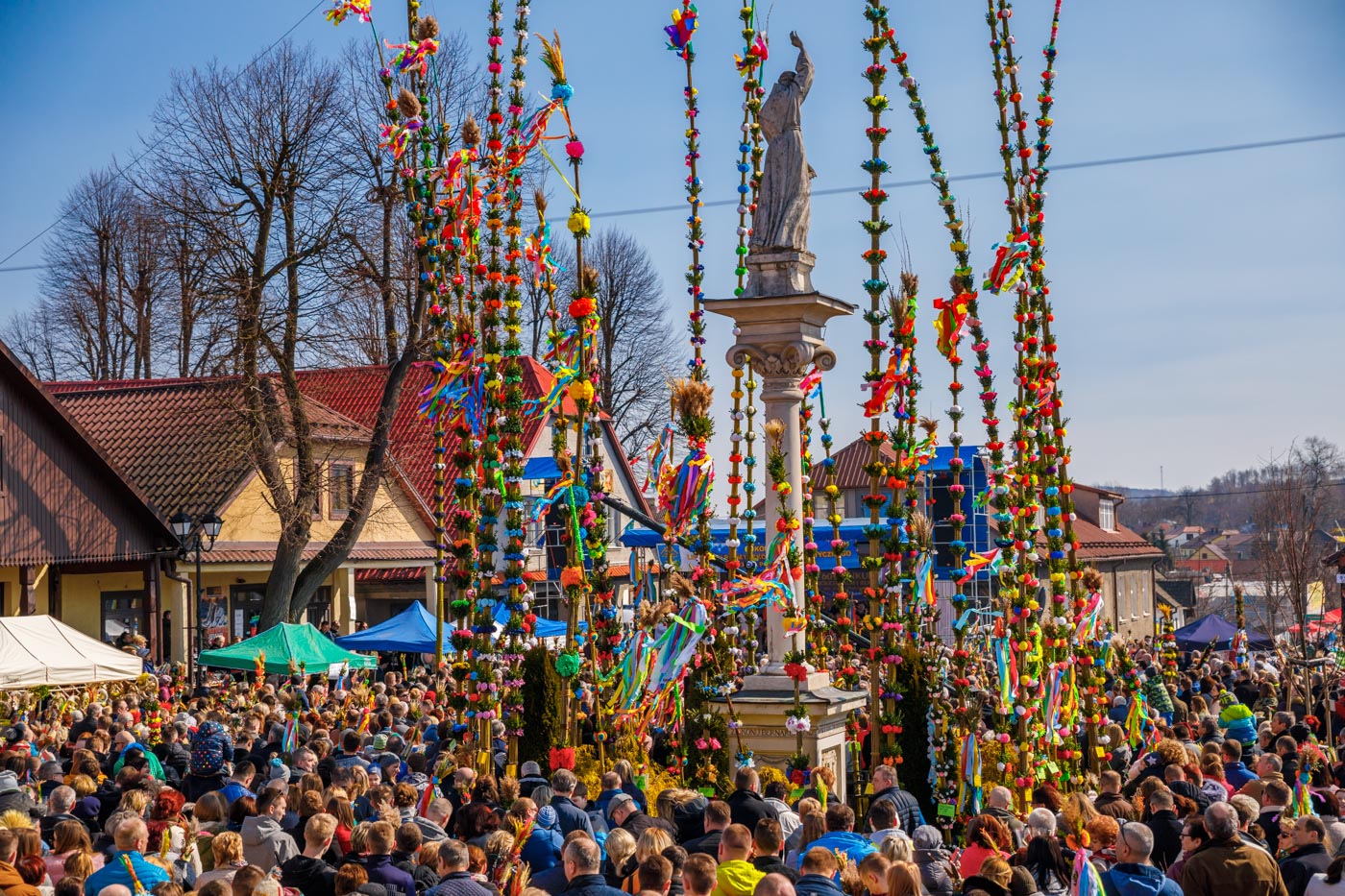 The Shrovetide Review of Roma Groups

Another interesting tradition in Lipnica relates to the Carnival season. The Carnival customs developed in Poland since the middle ages. One of them consists in disguising in different costumes. In Lipnica, the masquerade takes place on the last day of the Carnival, called zapusty (Shrovetide). Men disguise as Roma or Jewish men, peasants, or beggars, while women accordingly as Roma, Jewish or countrywomen, imitating their language and gestures.
Groups of people disguised in such a way visited houses and received money and food for the Shrove party, if unrecognized.
What remained from the old custom is not much, but the citizens of Lipnica Murowana are persistent in keeping it alive. Each year, a Shrovetide Review of Roma Groups is held in the Rural Community Centre in Lipnica Górna, during which various Roma groups present themselves and many competitions and plays are organized.