Haczów –
Church of the Assumption of the Blessed Virgin Mary
and St. Michael the Archangel

Haczów – Church of the Assumption of the Blessed Virgin Mary and St. Michael the Archangel.

Haczów is a village founded around the mid-14th century and the local parish comes from 1388. However, it is difficult to say how long it took to organize the parish and the type of church that might have been built in the village in the 1st half of the 15th century. The present church was erected at the end of the 1450s: dendrochronological examination on the wood used for its construction proved that the temple was built of fir wood from trees that had been cut down in 1458-59 and which were over 100 years old at the time. Wooden buildings were then erected from non-seasoned rough wood, so the church could have been built in 1459. Church ceilings were usually added at a later time, which was the case here as well, as a study of the ceiling boards showed that they had come from trees felled in 1472. On the other hand, samples from the walls of the added sacristy appeared to have dated from the 1860s.
The founder of the church in Haczów is still unknown, but Haczów itself was a royal village. Interestingly, the same carpentry workshop that erected the church in Haczów may have built a temple in nearby Iwonicz (1464). According to tradition, the church in Iwonicz was founded by King Casimir IV Jagiellon, so maybe both these churches were founded by the Polish king himself…?
We know that, in 1624, Haczów was destroyed by the Mongol (Tatars) invasion and old literature assumed that the present church in Haczów was built after the invasion and referred to it as a 17th-century monument. Meanwhile, the existing church was rebuilt in the 17th century, with a tower-bell, arcades, ridge turret, and new windows added. According to Piotr Łopatkiewicz, these changes were made a bit later than 1624. Right after the Tatars’ invasion, in the face of the devastation, the parishioners did not have the means to reconstruct the church. But a few years later, in 1631, the king handed over the parish in Haczów to the Krosno mansionary canons who, in turn, had property that allowed them to carry out architectural work, so the reconstruction of the church in Haczów may have started after 1631.

In the 18th century, new windows, the Our Lady of Sorrows Chapel, a small strongroom and a new matroneum were added to the church. In 1789, the walls of the church, which were then covered with dirty and darkened late-medieval polychrome, were whitewashed: the preserved parish chronicle, kept since 1781, contains a record under the date 1789 of whitewashing the walls and covering the old paintings from 1494. In the 2nd half of the 19th century, the church underwent some further renovation works and, at the turn of the 19th and 20th centuries, there were further additions of new polychrome: the Assumption of Mary into Heaven on the ceiling of the chancel and the trompe l’oeil painted architectural divisions on the walls of the temple. Zaskrzynienia in the nave (or extended beams of the upper part of the chancel’s side walls, looking like suspended chests) were supported by pillars which substituted the three-aisle layout.
The 1955 discovery of medieval murals by Jerzy and Stanisław Gadomski might have saved the church from destruction. It turned out then that, contrary to popular belief, the temple was not built in the 17th century, but had been founded two centuries earlier. At the turn of the 1960s and 1970s, the renovation of paintings was led by Wojciech Kurpik from the restoration workshop of the Museum of Folk Architecture in Sanok. This was followed by the discovery of 11 boards from the original church ceiling, containing the remains of figural ornaments. A comprehensive renovation of the paintings and subsequent discoveries took place in the early 1990s, but it was not until 2000 that 10 of the boards were exhibited on the ceiling, arranged according to the 1993 concept by Prof. Jerzy Gadomski. Today, the church in Haczów displays the exposed elements of most of the preserved 15th-century paintings, although parts of later polychrome showing the character of the decorations from the turn of the 19th and 20th centuries also remain. The side altars from the 18th century and polychrome church benches (around 1700) returned to the interior as well. In 2003, the church was added to the UNESCO World Heritage List. 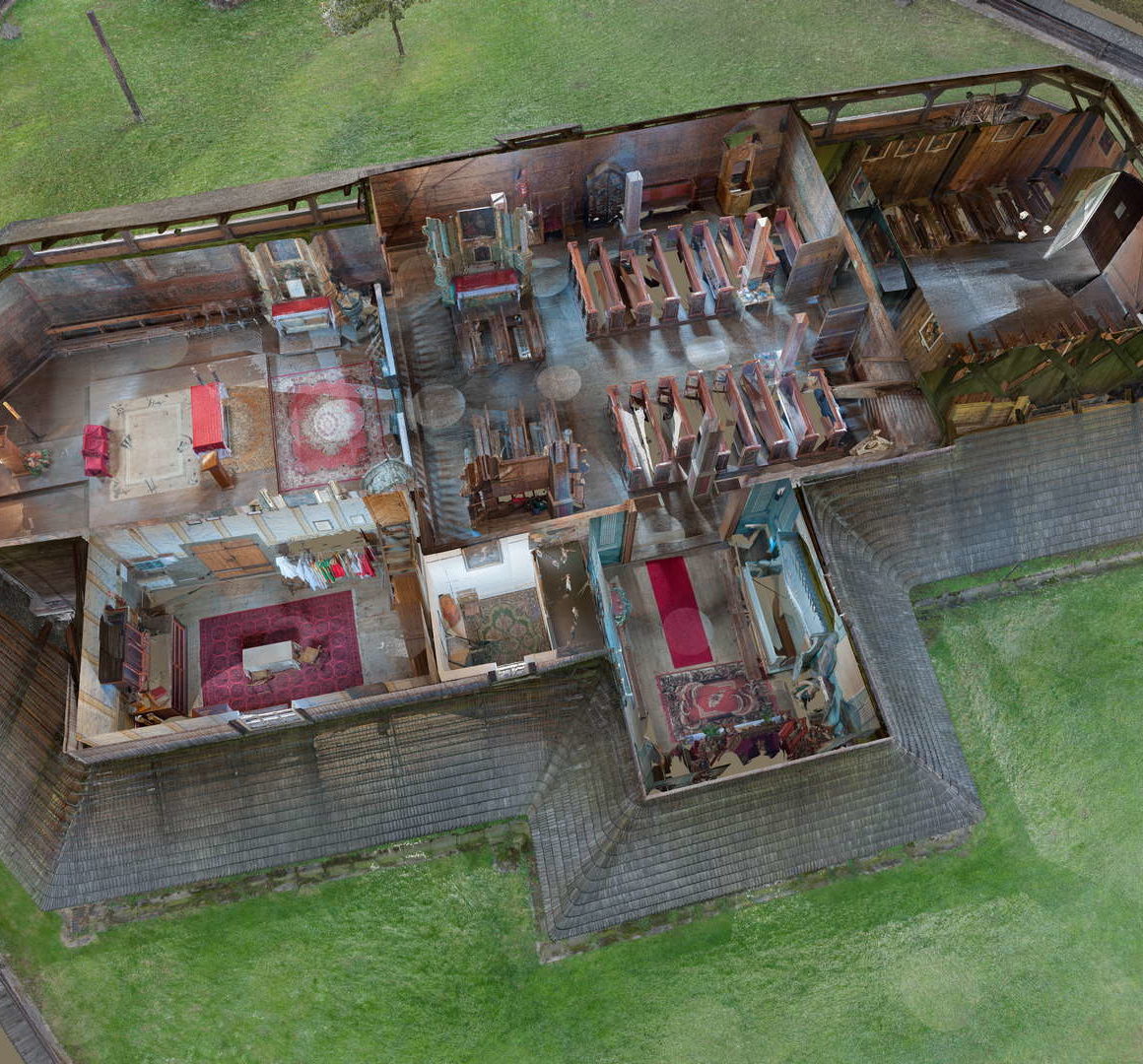 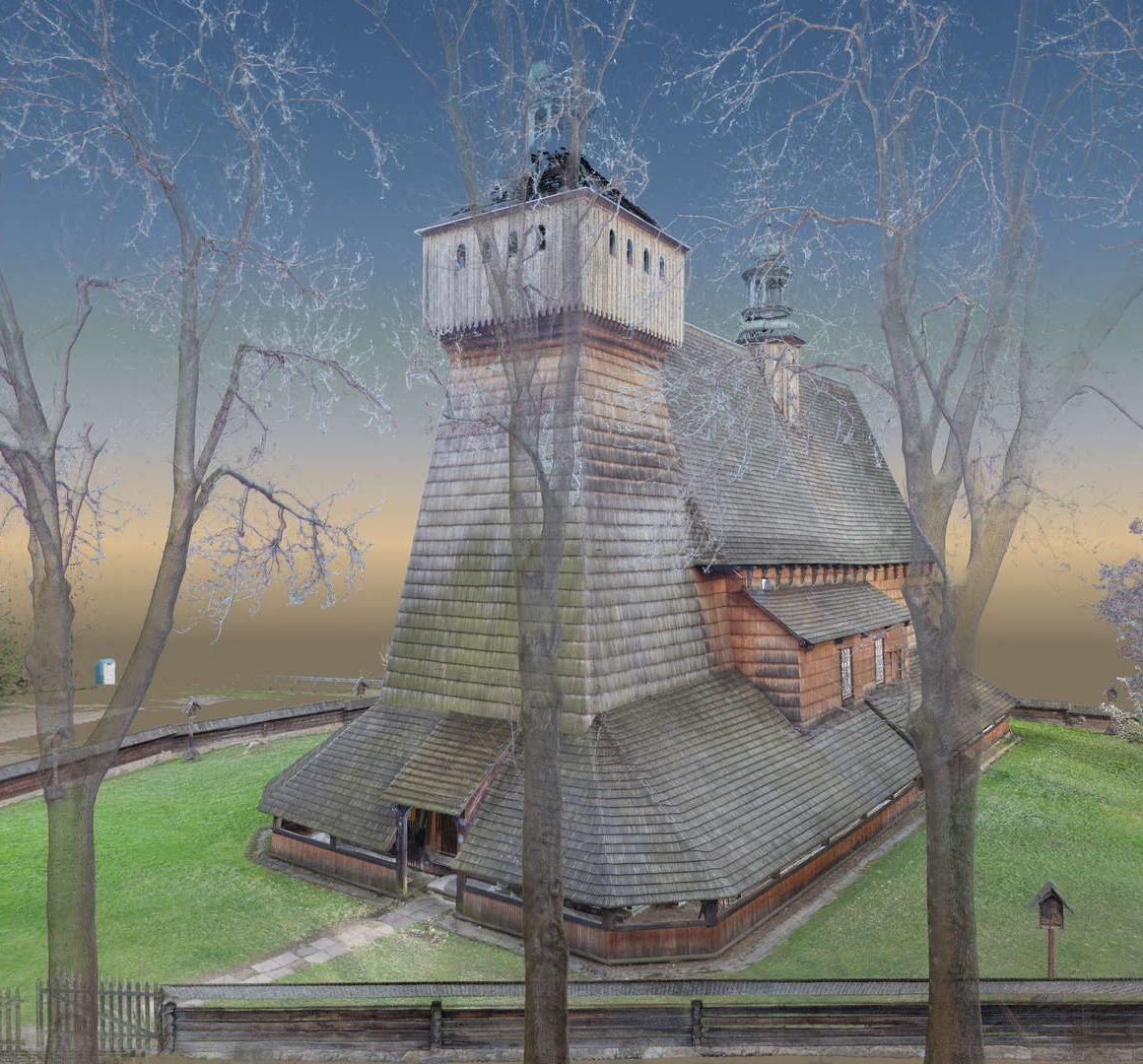 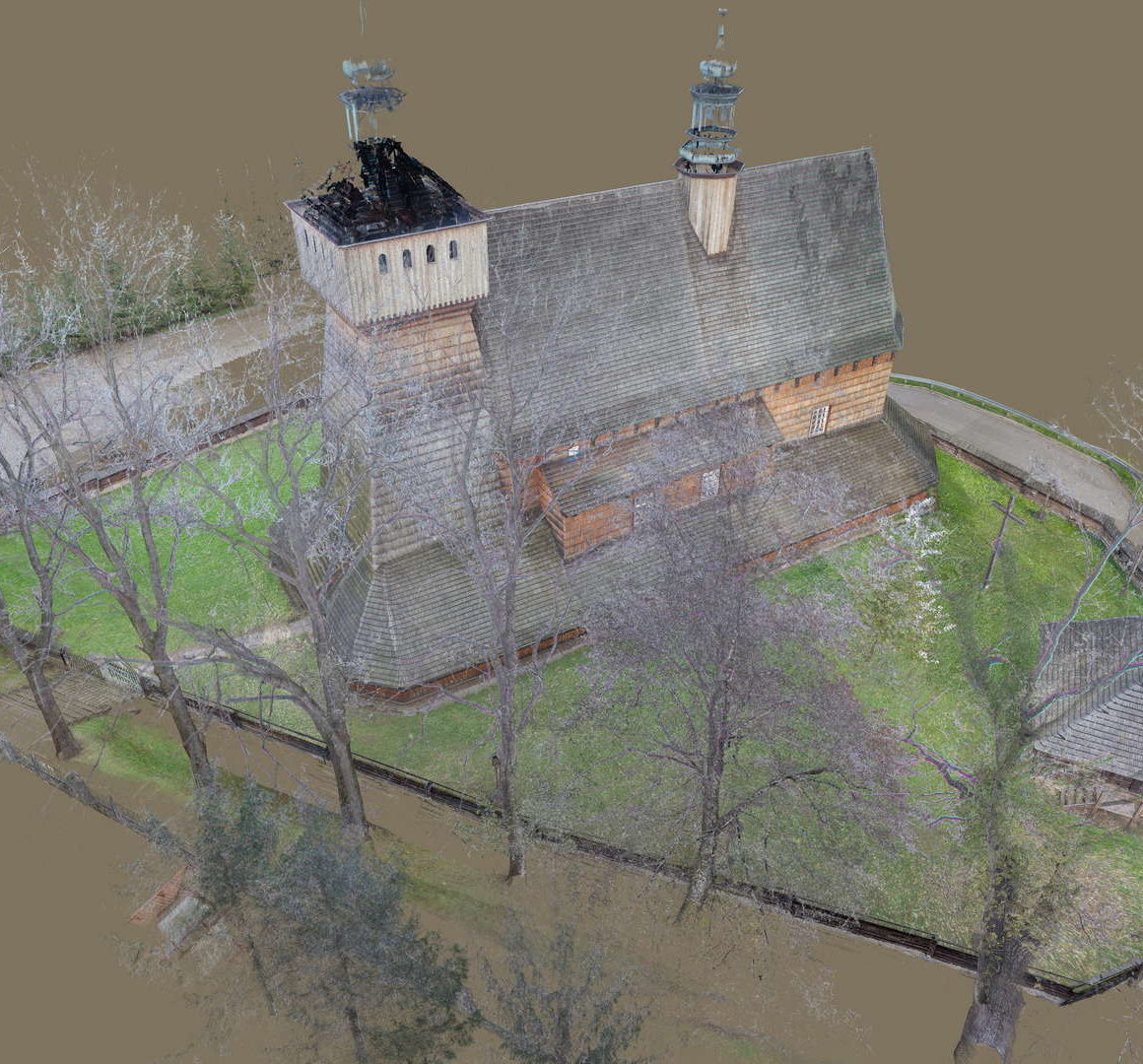 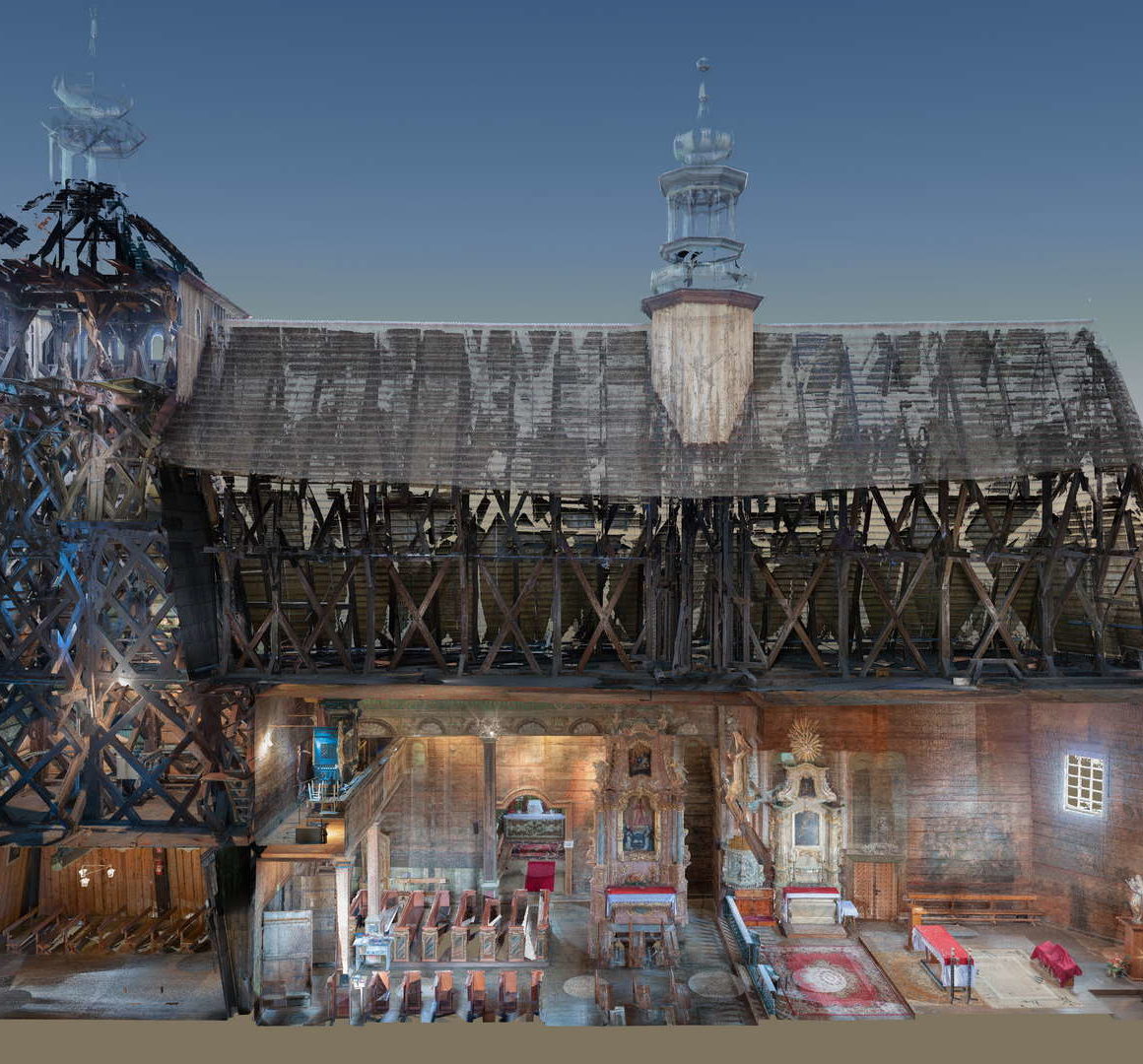 Unfortunately, the 1st half of the 20th century saw numerous wooden monuments disappear from the Lesser Poland landscape, not even as a result of war damage or fires, but simply as a result of demolition, since old churches were replaced with new, brick ones. The wooden church in Haczów almost suffered the same fate. After the war, a new church was built and started holding services in 1948. The old church was abandoned and its floors were removed. In the mid-1950s, the windows were broken, and anyone was able to enter the church, which was closed only in theory, through a hole in the bell-tower. It was then that the discovery of the late-Gothic polychrome saved the church from destruction.
In the autumn of 1955, Jerzy Gadomski, a future professor of art history, and his cousin, Stanisław Gadomski, a graphic artist, both arrived in Haczów.

Jerzy Gadomski was 21 and studied in the Faculty of Conservation and Restoration of Works of Art at the Academy of Fine Arts in Kraków. The church in Haczów was in a run-down state at the time, basically doomed to devastation and possible demolition, and its altars had already been removed. It was in the empty spaces where the altarpieces used to be that the Gadomskis noticed pieces of paintings under the thick layer of dirt; they seemed to be part of a completely different ornament than the decorations on the other parts of the walls. Apparently, during the whitewashing of the church interior in the 18th century, the altarpieces were not moved away and, therefore, the walls behind were not painted over. It was the discovery of late medieval polychrome that would completely change the state of research carried out in the church in Haczów. 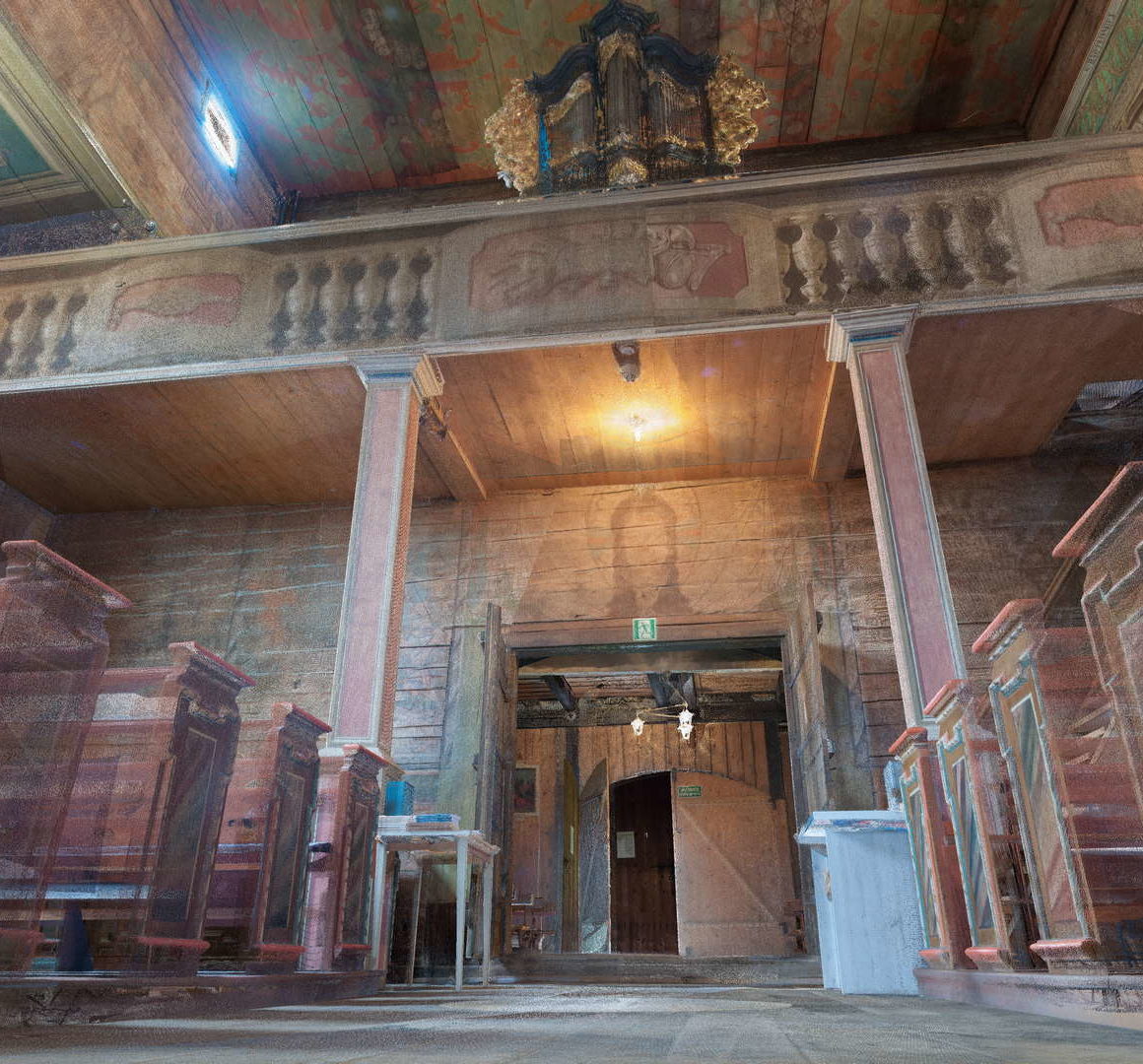 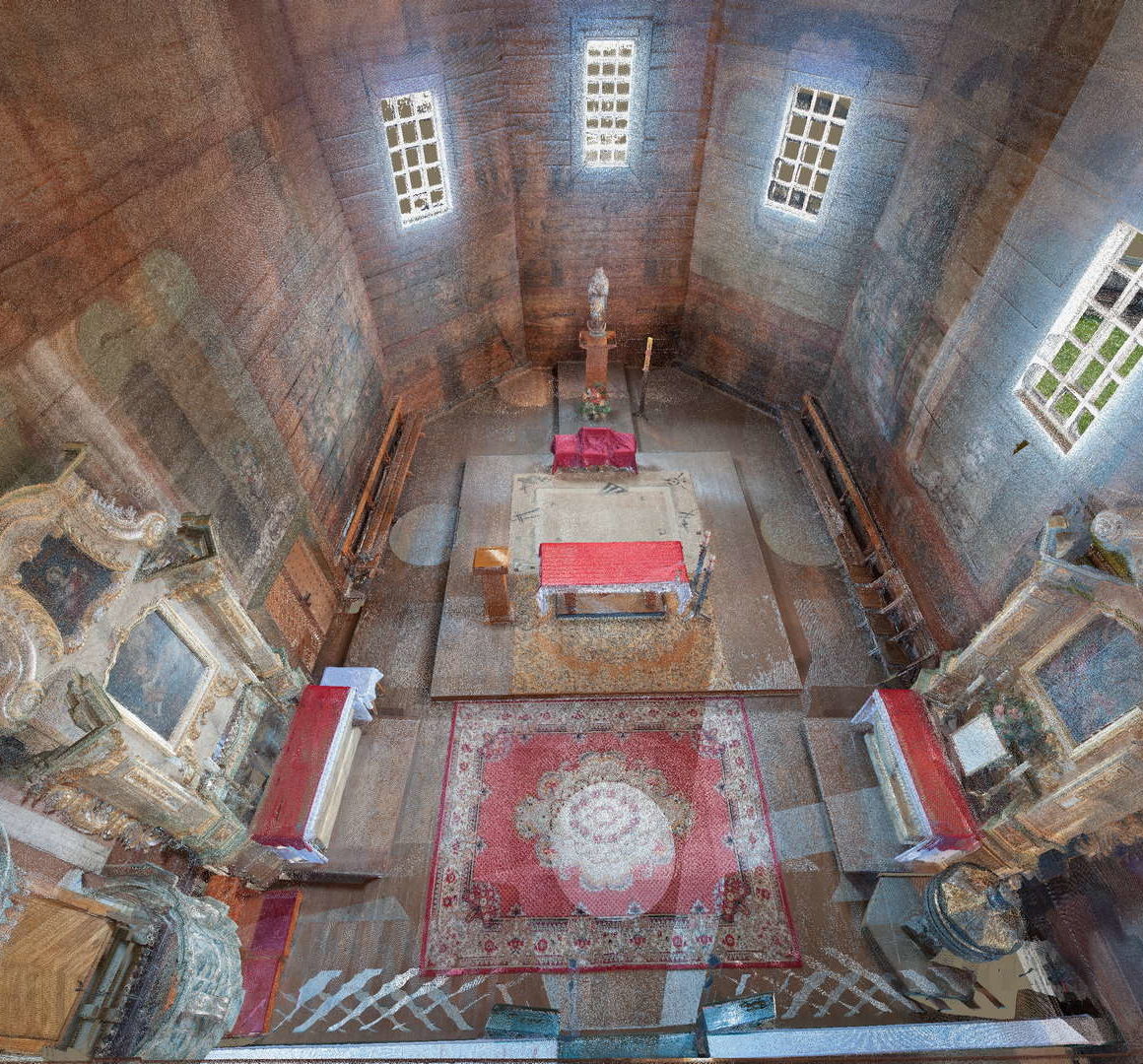 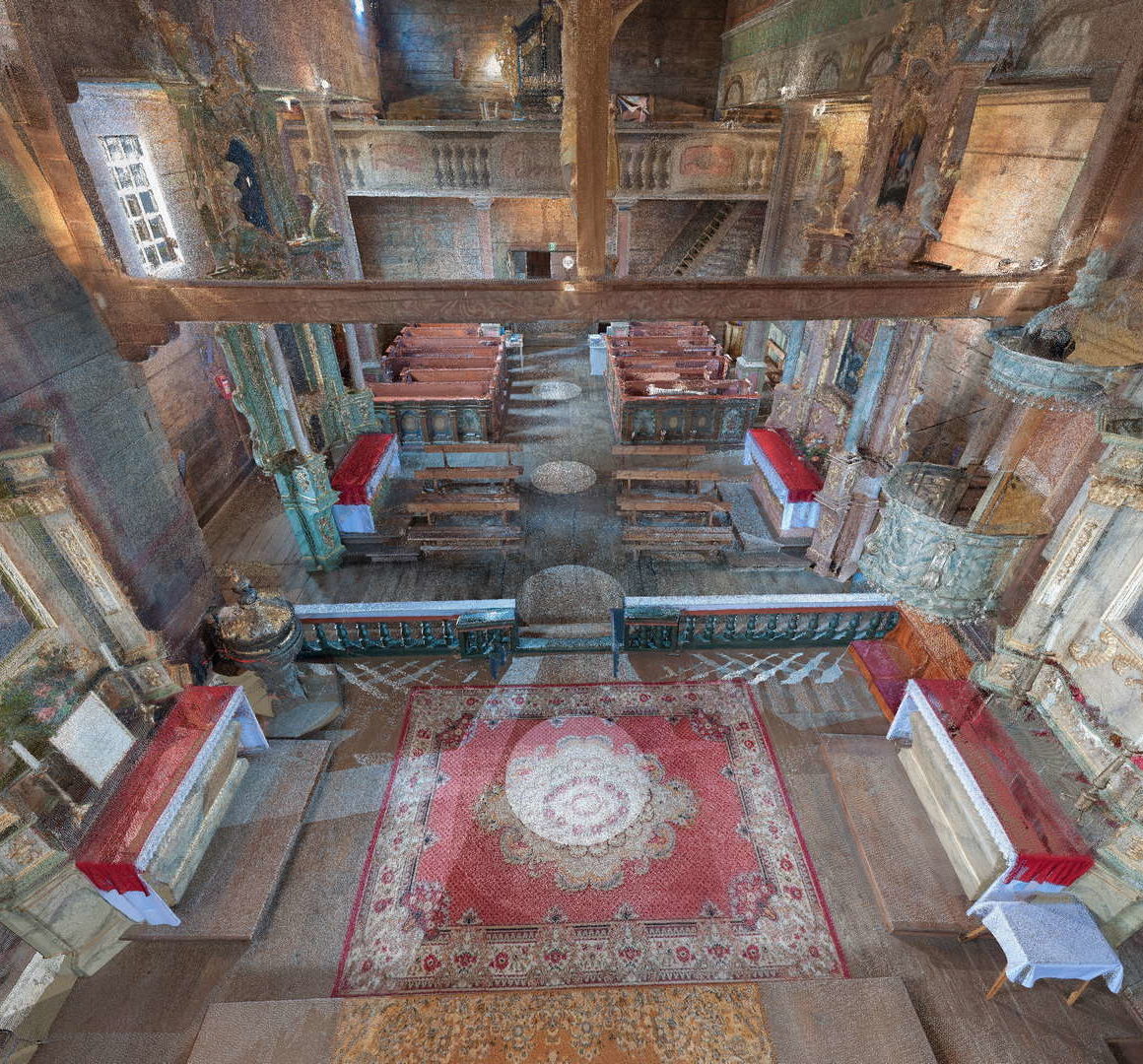 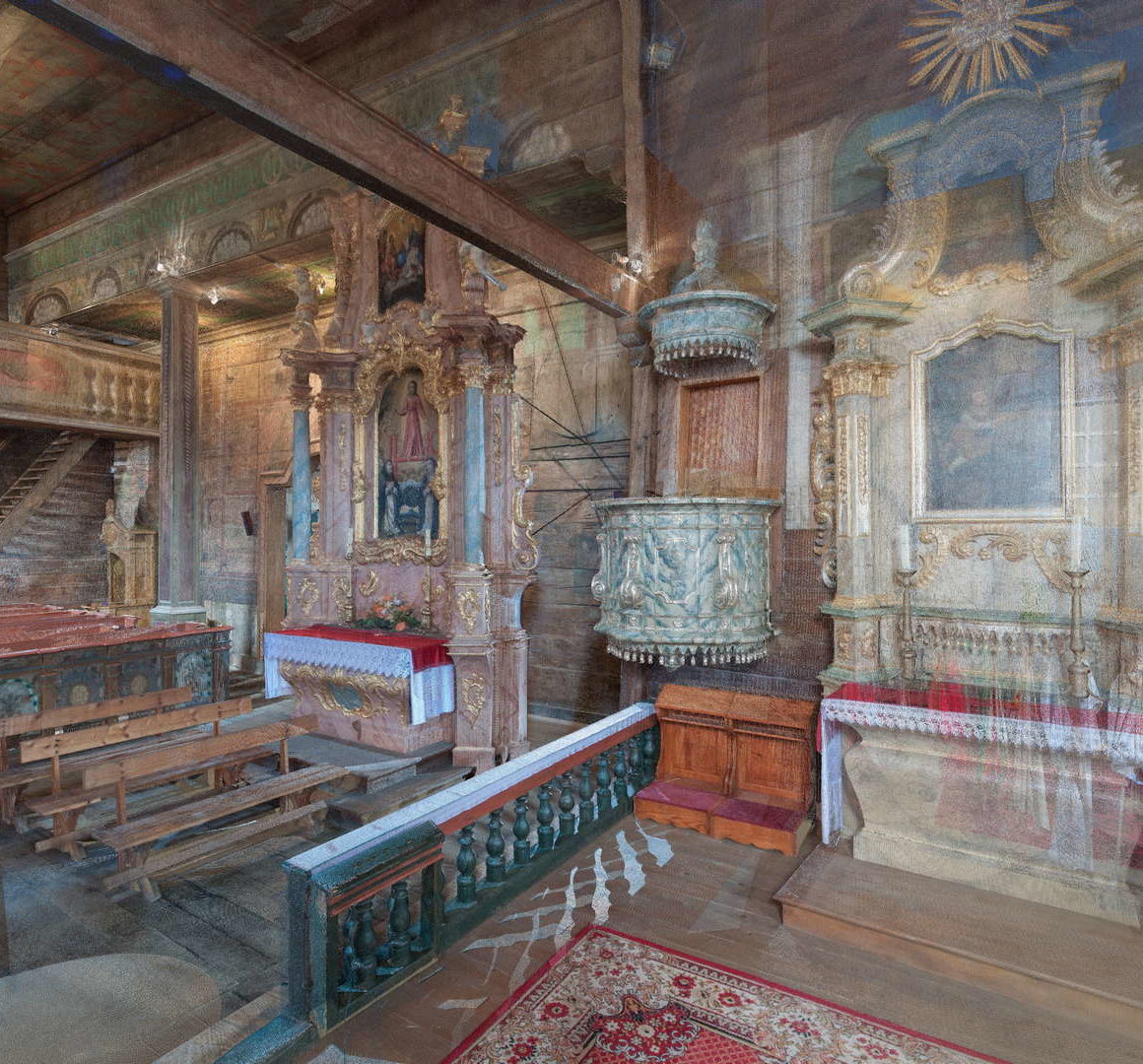 The church in Haczów is the oldest, largest and best preserved wooden Gothic church built using a log construction in Europe. It is also the only wooden monument in Poland with preserved figural paintings from the 15th century.
The church was built of fir wood, on a stone foundation. It is a log building, i.e. a structure built with horizontal logs interlocked at the corners by notching and such buildings were erected without the use of nails. The nave is built on a square-like plan, the chancel is slightly narrower than the nave and closed on three sides from the east. The total length of the nave and chancel is over 25 metres. The interior is covered by ceilings, the nave’s ceiling has zaskrzynienia: a structure that looks like suspended chests consisting of extended beams of the upper part of the chancel’s side walls, which forms a support for the timber roof truss that covers the whole church (including the nave and the chancel).

The system combining the chest-like beam structure and the timber roof truss (in Polish: system więźbowo-zaskrzyniowy) was used only in Lesser Poland (the term is here understood as a historical region, which mostly coincides with the area of former Western Galicia, much larger than the present voivodeship) and was a major achievement of the local medieval carpentry workshops. In addition, the timber roof truss structure was secured by catches located under the eaves, which were visible from the outside.
In modern times, a bell-tower with a belfry (a room hung in the upper part), built using a set of posts which support the beams, was added to the western side of the church. The church has two entrances: the western one, which may have originally been two-winged, but was transformed after the tower was added, and the southern entrance with an original late-Gothic portal. 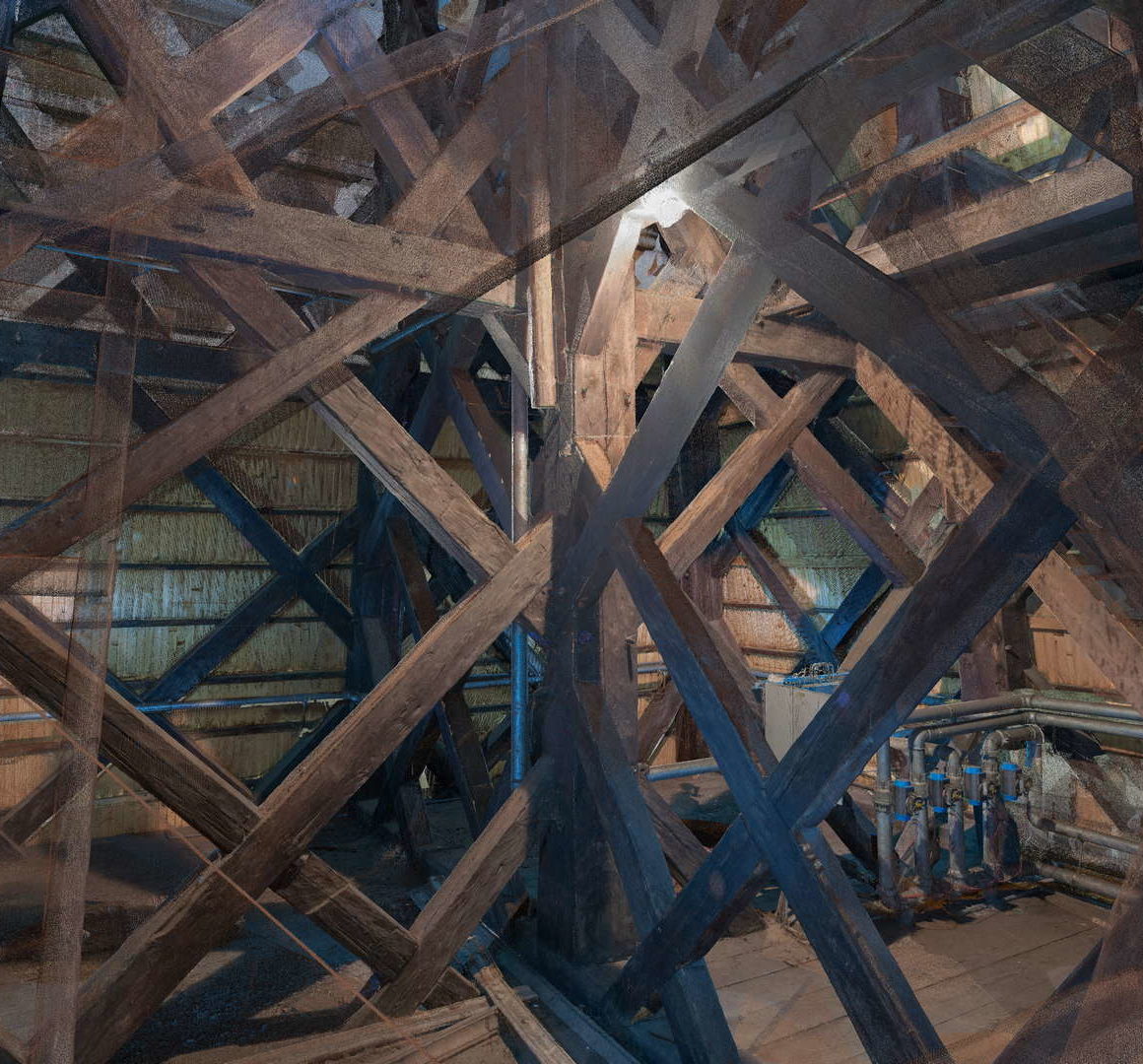 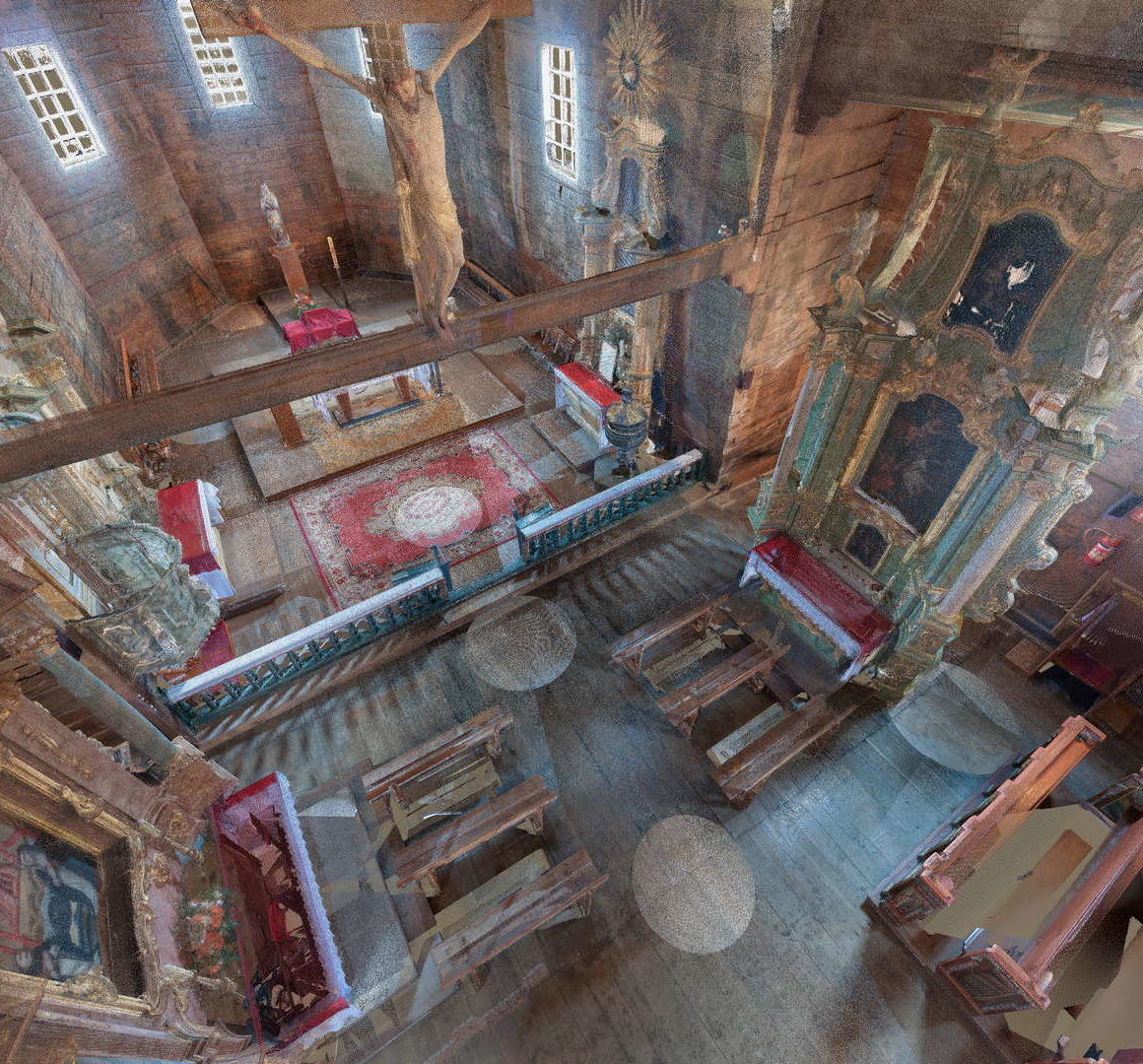 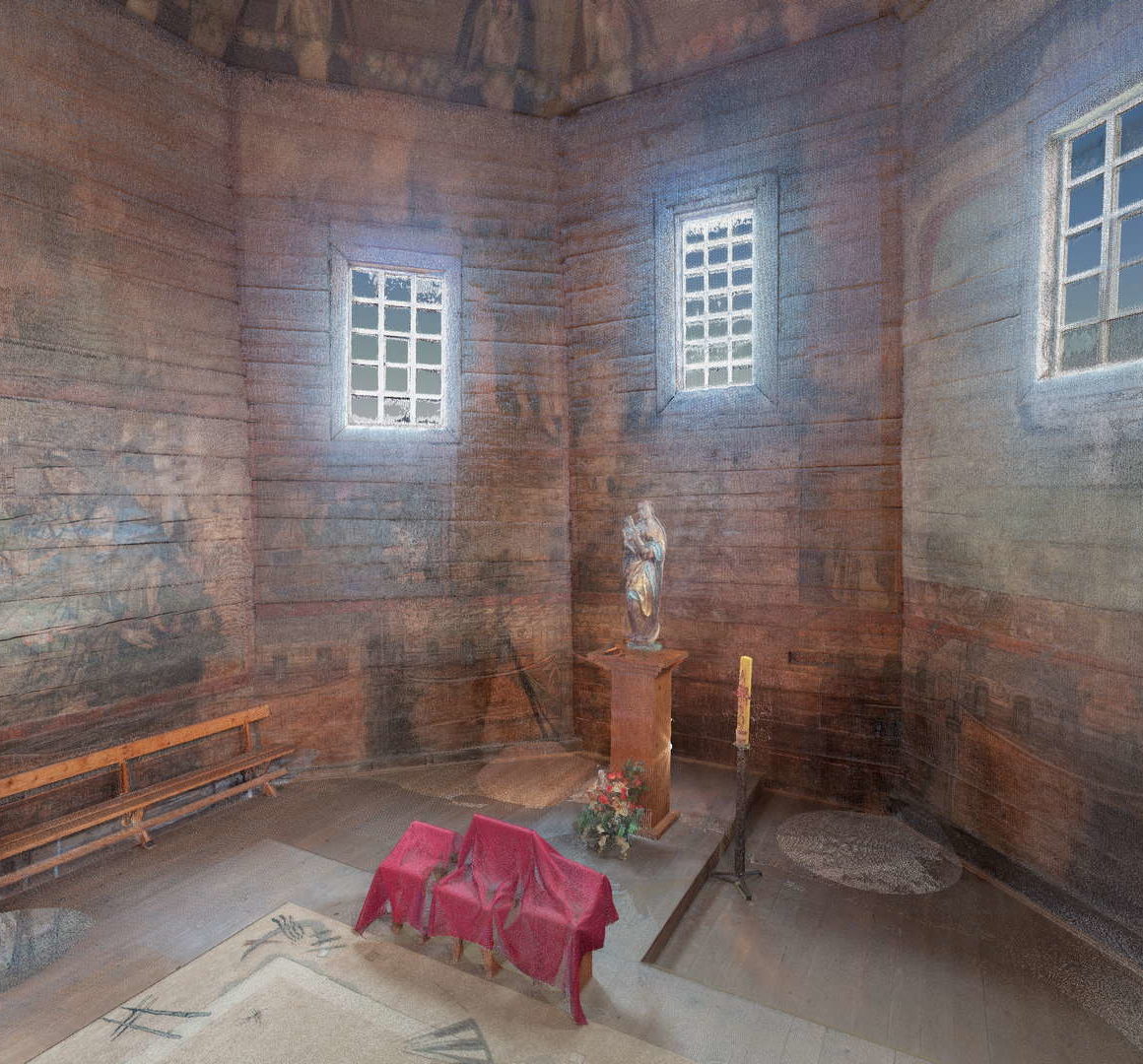 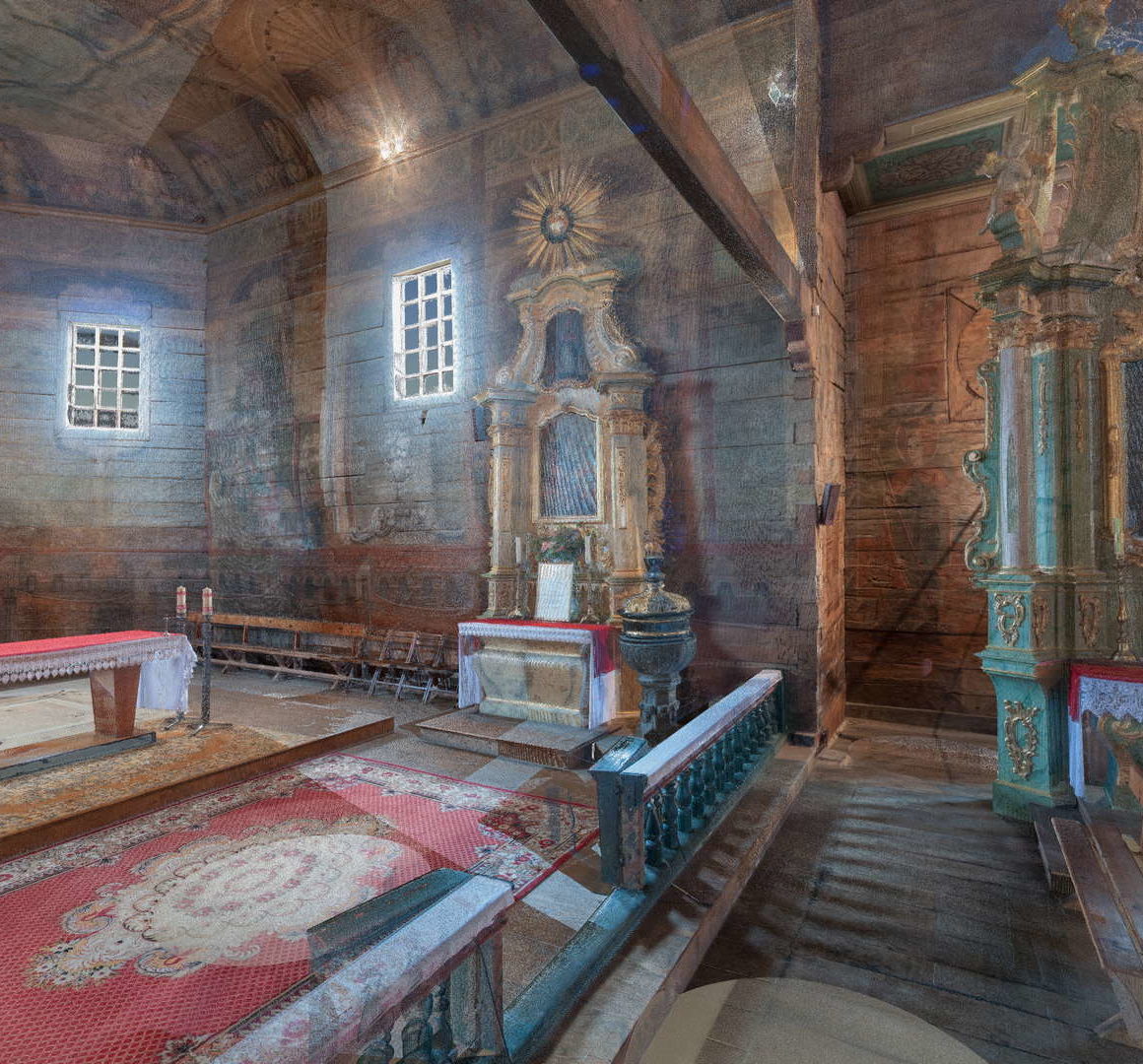 Panotour – Haczów – Church of the Assumption of the Blessed Virgin Mary and St. Michael the Archangel