Kalwaria Zebrzydowska
Chapel of Our Lady of Kalwaria

Kalwaria Zebrzydowska – The Chapel of Our Lady of Calvary

The description of the temple would not be complete without mentioning its chapels. And so, on the left side of the chancel, there is the Chapel of Our Lady of Kalwaria. Its construction was initiated by Michał Zebrzydowski, dates back to 1658-1667, and was created in order to house the miraculous image of Our Lady, which was placed there as early as 1667, in the still unfinished chapel. Unfortunately, to this day, researchers have not been able to determine the name and surname of the architect responsible for the project. The very process of building the chapel is quite characteristic of the then and, unfortunately, current Poland, as it reflects the ever-present financial difficulties.

Due to his problems with financial liquidity, Zebrzydowski had to stop funding the construction. The monks were forced to donate over 180 grzywnas of silver from the offerings made by the faithful. According to the initial plans, those votive offerings were to serve as a decoration of the altar. The founder did not forget about his work and, in his will, he reminded his family to finish the chapel and decorate it properly: to make the gilding of the dome, as well as the bottom grates and side epitaphs, and cover the tops of the dome with any durable metal. The altar was to be made of ebony, and the silver statues were ordered by Zebrzydowski in Augsburg, who ordered his family to add a few hundred more grzywnas to the aforementioned 180.

Unfortunately, the widow and her daughters remained deaf to those requests of the deceased. The attempt to cover the dome of the chapel with an iron sheet was successful, and then a rather modest altar was placed inside. The silver, which was to be used for ornaments, was returned to the monks in 1673. Currently, the chapel has the form of an octagon, decorated with eight pairs of columns and pilasters supporting the entablature. The decoration reflects the changes that Kalwaria underwent, the interior is decorated with late-baroque stucco. Additionally, there are cartouches and images of angels with bundles of fruit, as well as cartouches with images of saints and angels. The space between the stuccoes is filled with paintings made by Antoni Gramatyka in 1887.

In the basement of the chapel, there is a tomb of the founders, Jan and Michał Zebrzydowski, Magdalena Czartoryska, Józef Czartoryski, and Józef Klemens Czartoryski. During his memorable 1979 pilgrimage to his homeland, John Paul II said some very personal words about the chapel.“What is particularly endearing is the discretion with which Our Lady lives in her sanctuary. The fact that she lives in a side chapel like this.” 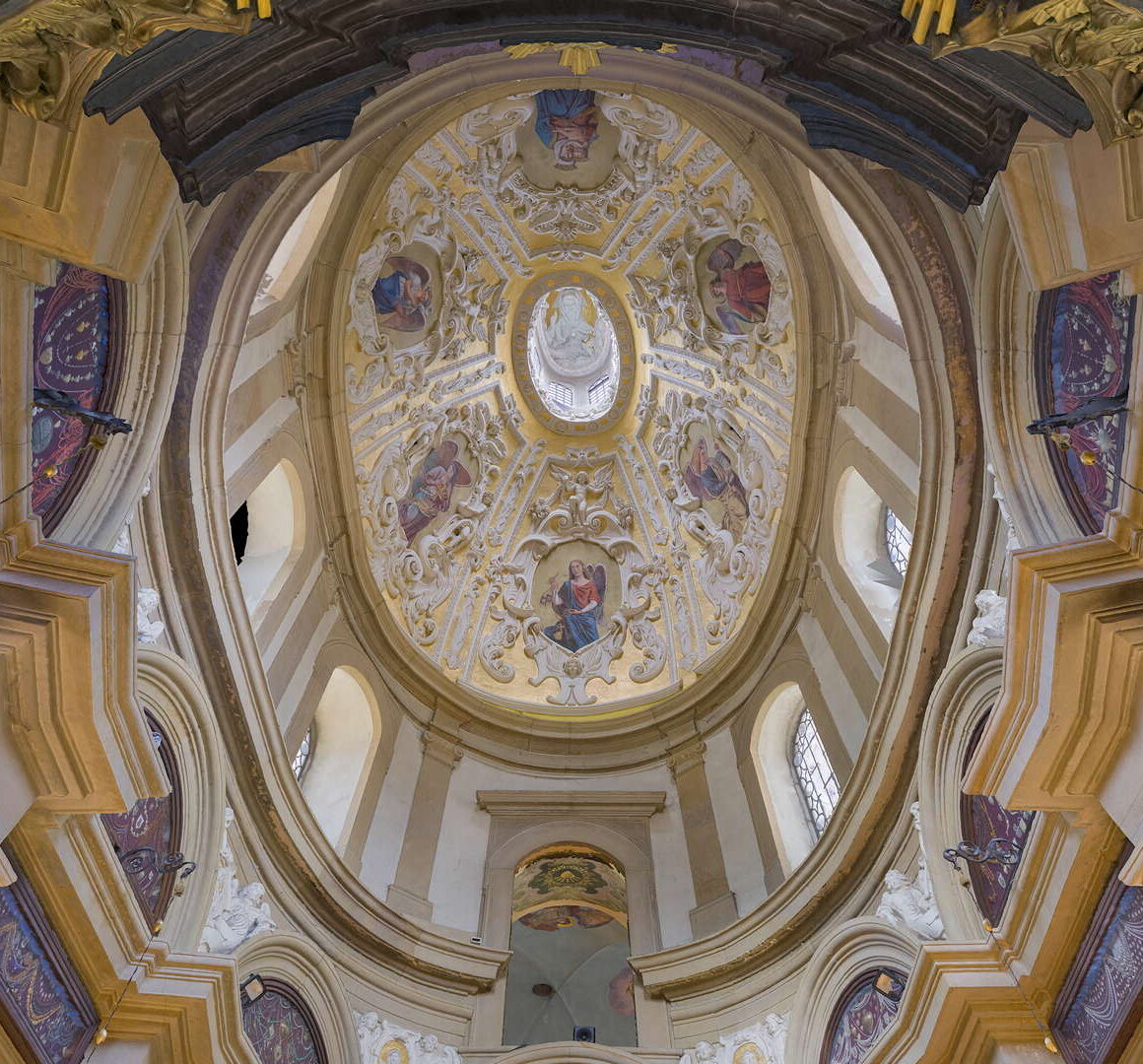 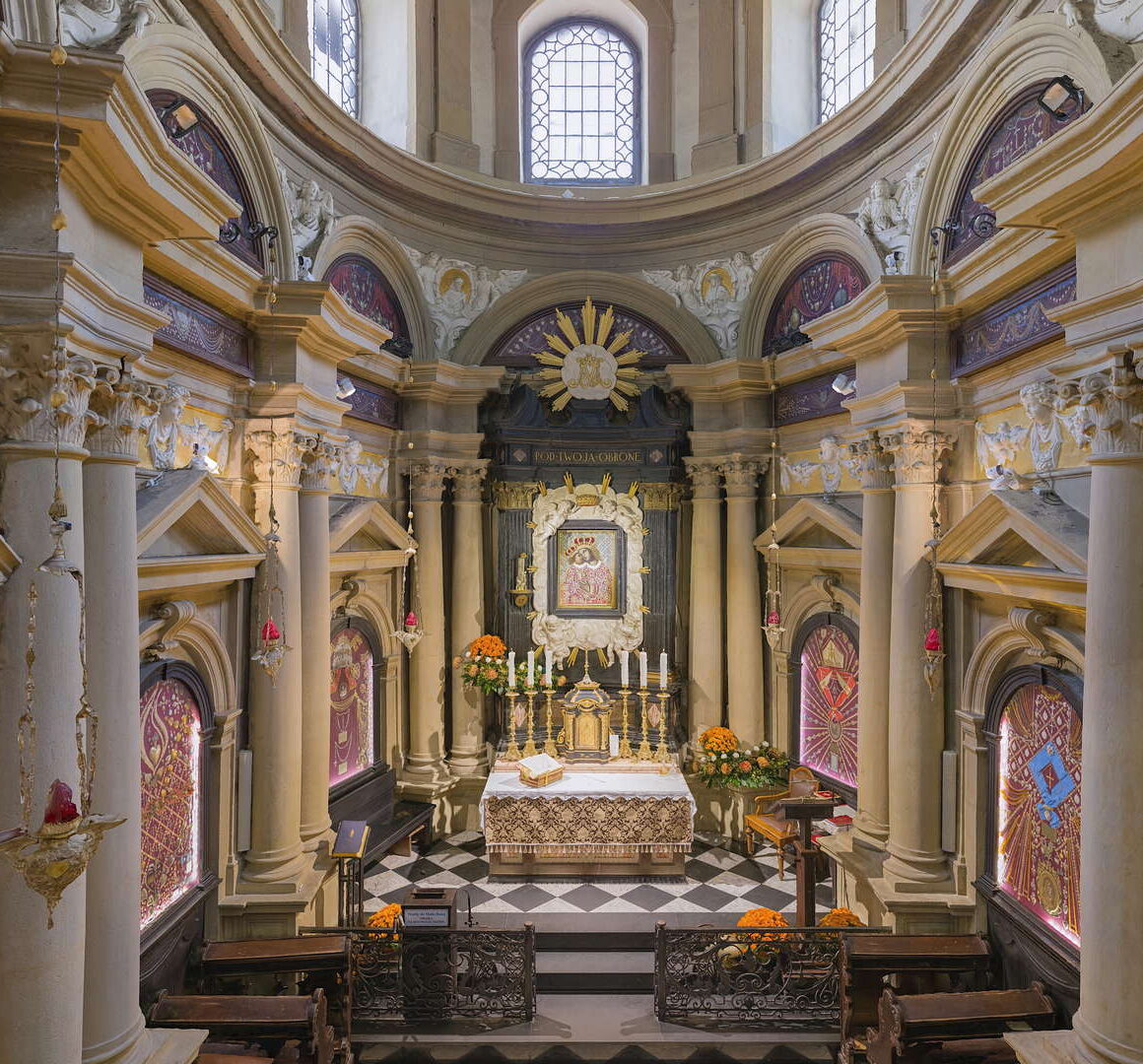 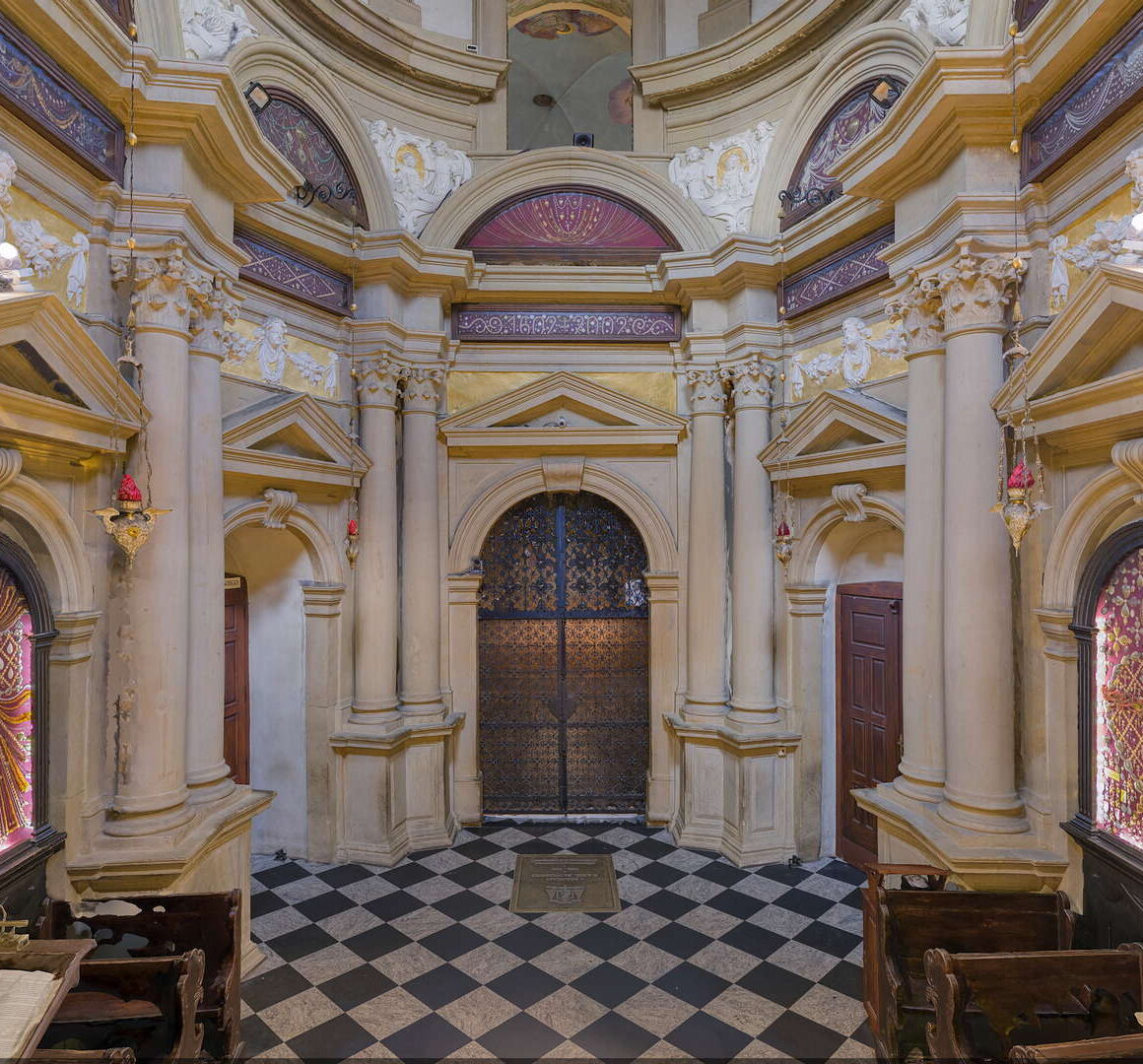 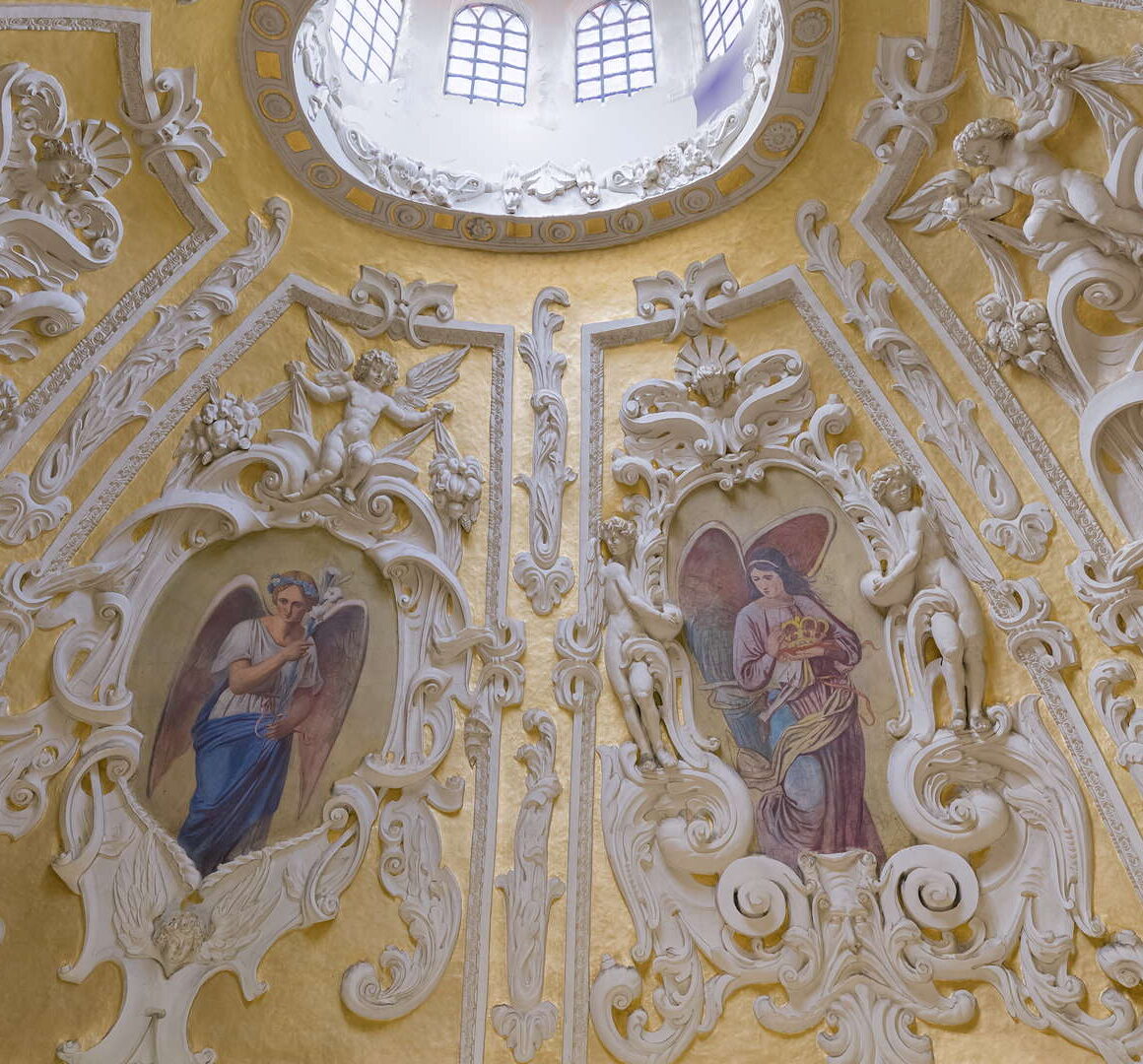 Inside the Chapel of Our Lady of Calvary

The Chapel of Our Lady of Calvary is an example of Baroque and Rococo style, with elaborate ornamentation and an abundance of decorative elements. The chapel is twenty-two meters high, nine meters long and six meters wide.

The altar with the portrait of Our Lady of Calvary is located here. The chapel, built on an octagonal plan, is crowned with a dome. The vault of the chapel is covered with paintings and reliefs. The walls are decorated with over a dozen of relief figures of saints and angels, columns, and showcases with votive offerings—golden objects donated by the faithful.

The altar is located across from the entrance. It consists of a table and a so-called altar retable, which is a richly decorated wall of black marble. Flat columns crowned with gilded ornaments were carved on its left and right sides. In the middle of the wall hangs a white painting frame made of stucco, which is a type of plaster.

It is cloud-shaped, with four angels in the form of winged babies floating among the clouds. Two of the angels are holding a golden crown above the upper edge of the painting. Above the crown runs a gilded inscription: “Beneath thy protection”, and above that – a gilded letter “M” encircled by golden rays.

In the walls of the chapel, to the right and left of the altar, there are two niches holding showcases with votive offerings. Inside each showcase, a maroon fabric spreads out, covered with hundreds of golden rosaries, hearts, crosses, and strings of pearls, all arranged into geometric patterns. Two round columns of beige sandstone rise between the niches.

Eight large windows are placed around the lower belt of the dome vault. Above them, the vault is decorated with paintings of the Madonna with the Christ Child and five angels. The angels are slender young men with long robes and big wings. The paintings are surrounded by white reliefs in the shape of twisted leaves, stems, and angels. The vault of the dome is painted gold.

The Icon of Our Lady of Calvary

The icon dates back to the seventeenth century. Its author is unknown. It was painted on canvas with oil paints. The canvas was then glued to a board. The icon is fifty-eight centimetres wide and eighty centimetres high.

Mary tilts her head to the right, toward her son. On her head she wears a delicate, transparent veil and an embellished red bonnet. The front of the bonnet is crescent-shaped, framing Mary’s brown hair. A string of white pearls adorns the edge of the bonnet. Precious stones – green emeralds and red rubies – are also attached to it, surrounded by gold embroidery in the shape of flower petals. A ruby cross is attached to the lower edge of the bonnet, hanging over Mary’s left eye. The left edge of the bonnet is adorned with a small red rose. Mary has a long, glowing face, with a smooth forehead, regular brows and a straight nose. Her large, brown, thoughtful eyes are gazing to the right. Her red lips are expressively shaped. Mary is clad in a plain, dark blue cape with a pink lining. A red dress emerges from beneath it. Mary raises her left arm bent at the elbow. Her slender-fingered hand, positioned at the height of Mary’s chest, is stretched towards Jesus.

Jesus is plump and half-naked. His brown hair is covered with a bonnet, almost identical to Mary’s. The only difference is that the cross is attached to the upper edge of the bonnet, and from its right edge hangs an ornament in the shape of a flower with golden petals and an emerald centre. With his left hand, Jesus embraces his mother’s neck. He presses his chubby face against Mary’s cheek. The left side of his face is obscured by the right side of Mary’s. His brown eyes are gazing at his mother’s face. His full red lips are parted. Jesus holds the edge of Mary’s cape with his right hand. A gauzy fabric covers his hips, softly falling towards his thighs. Along the lower edge of the icon runs an inscription: “IMAGO B.M.V. CALVARIENSIS”.

This type of artistic depiction of Mary and Jesus is called Eleusa. Its distinctive feature is Mary holding baby Jesus nestled against her cheek.

The icon is placed at the altar of the Chapel of Our Lady of Calvary. It is always presented in a so-called dress, which is a type of overlay adorned with embroidery of gemstones, silver and golden threads. The overlay has openings that only reveal the faces and the hands of the figures depicted in the icon. The rest of the icon is concealed. 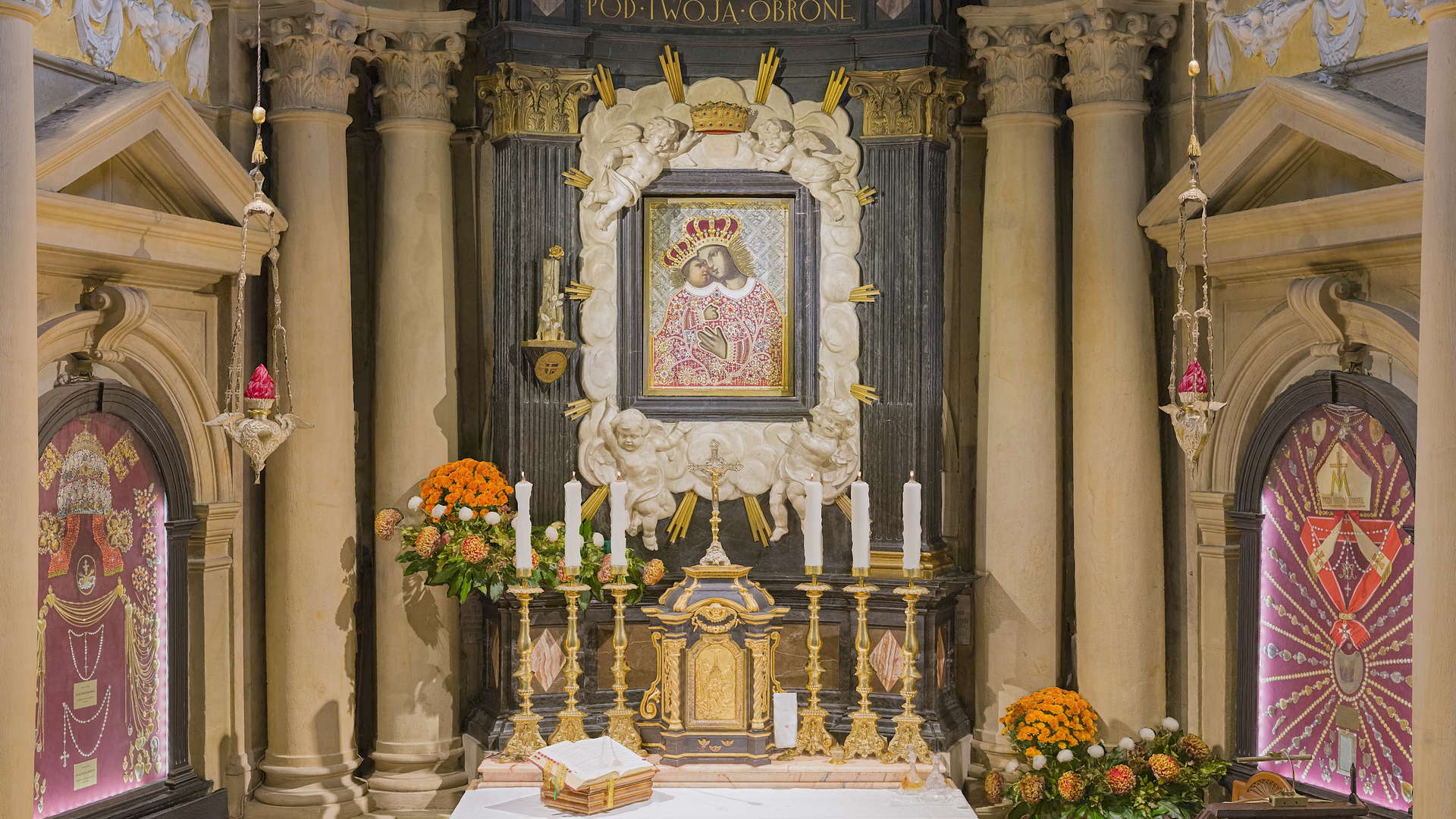 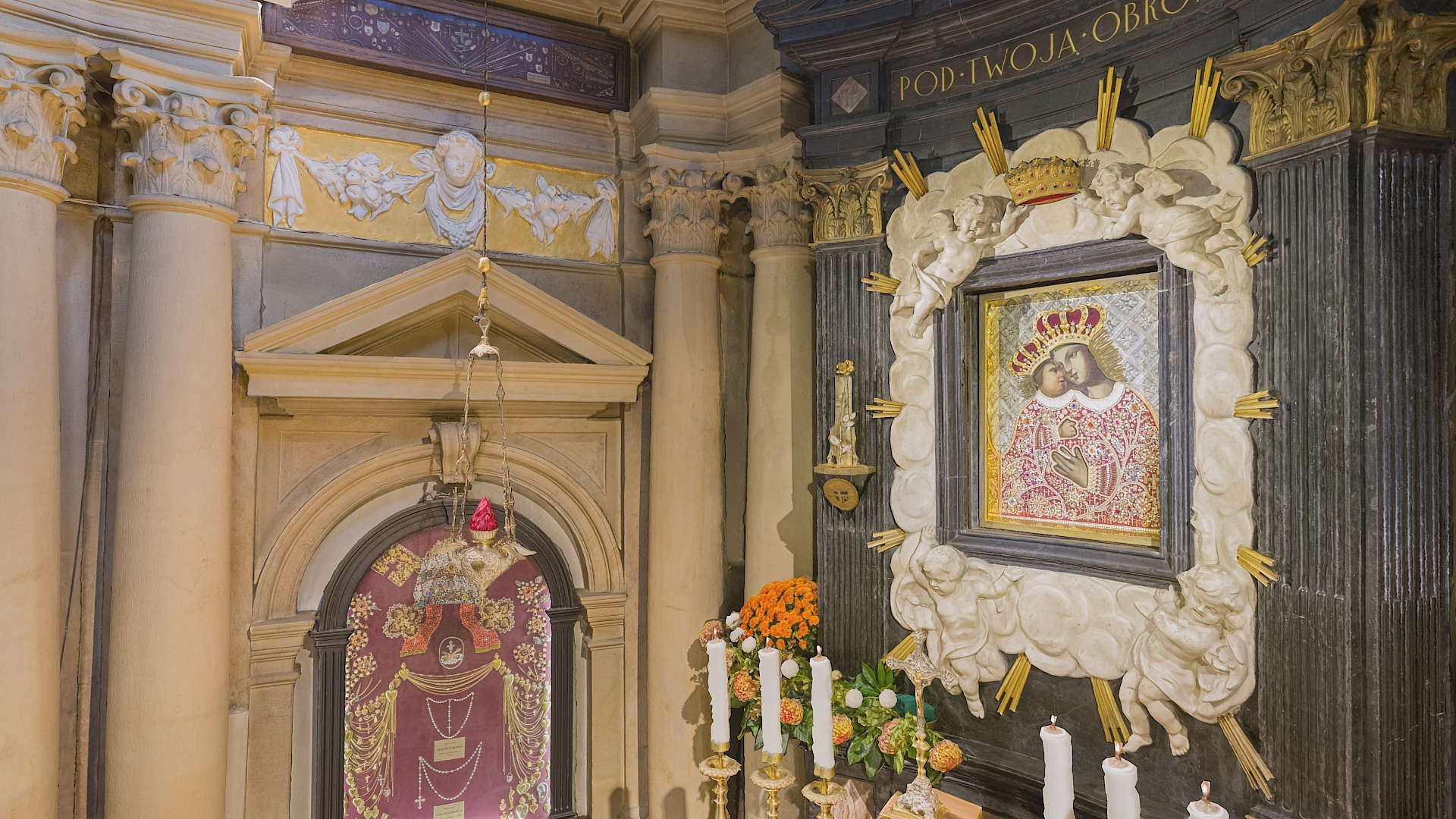 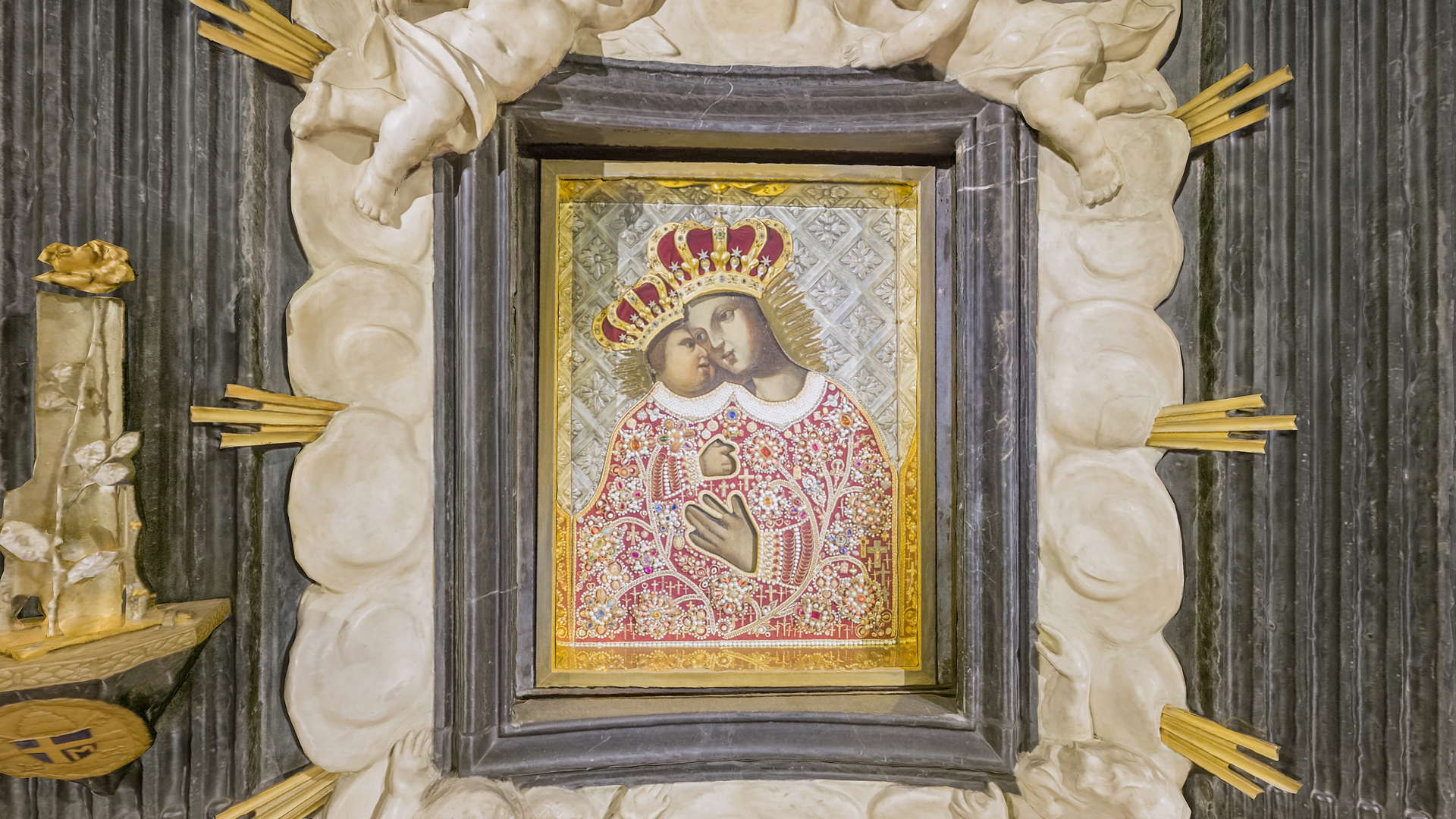 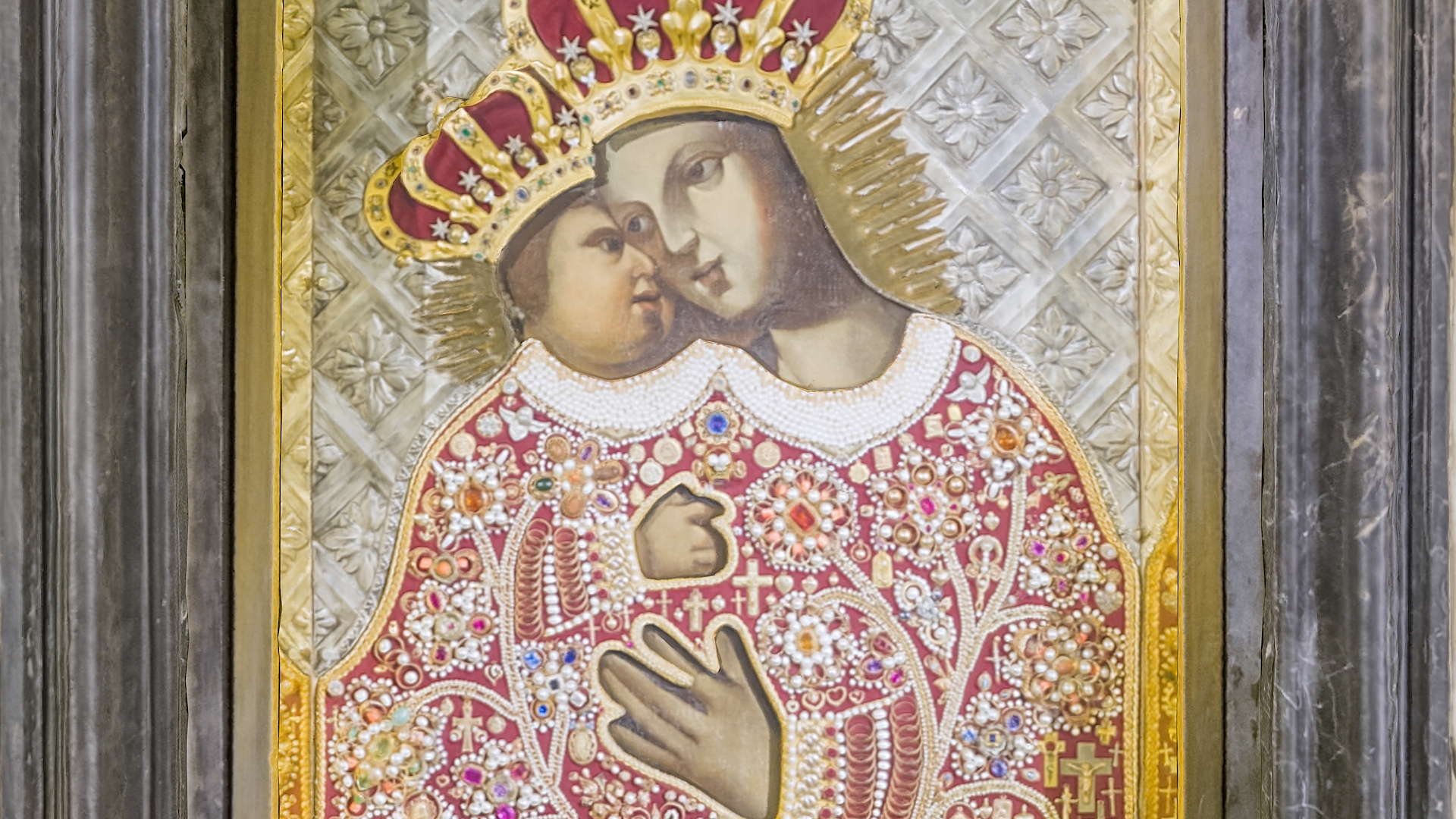