ękowa received its village rights under Magdeburg Law (1363), which was connected with the endowment of the local parish. The present wooden church was erected in the first quarter of the 16th century (around 1520), and then expanded in the 17th and 18th centuries (including the tower and soboty). The beam under the matroneum bears the date ‘1819’, referring to a renovation which included the strengthening of walls with braces. In addition, around 1888, the chancel was rebuilt and the interior of the temple was covered with a new polychrome. Unfortunately, only small fragments have survived to this day because the church was destroyed in 1915. The church was rebuilt in 1918 under the direction of Tadeusz Szydłowski; soboty were reconstructed in the 1950s, and the last complete renovation was carried out in 1984-1992.

The church, which has no aisle, is a log building with a chancel enclosed on three sides, which is narrower than the nave. The whole building is covered by a ridge roof (king post truss with carpenter’s marks), therefore, we can find zaskrzynienia in the nave.

It is a construction that looks like suspended chests; the extended beams of the upper part of the chancel’s side walls act as a support for the timber roof truss, shared by both the wider nave and the narrower chancel. The system combining the chest-like beam structure and the timber roof truss (in Polish: system więźbowo-zaskrzyniowy) was used only in Lesser Poland (the term is here understood as a historical region that mostly coincides with the area of former Western Galicia, much larger than the present voivodeship), and was a major achievement of the local medieval carpentry workshops.

The tower of the Sękowa church is topped with a dome with an octagonal lantern and a spherical cupola, open on the ground floor. The roofs of the open arcades go down to the level of the eaves overhanging the walls and are lowered only where the windows are, which creates a unique and picturesque view. The late-Gothic portals of the church (the tri-sectional western one and the southern one) have lintels enclosed with ogee arches. The portal between the chancel and the sacristy has been reconstructed. The wooden church lost its status of parish church in 1885 when Sękowa obtained a new brick neo-Gothic church. 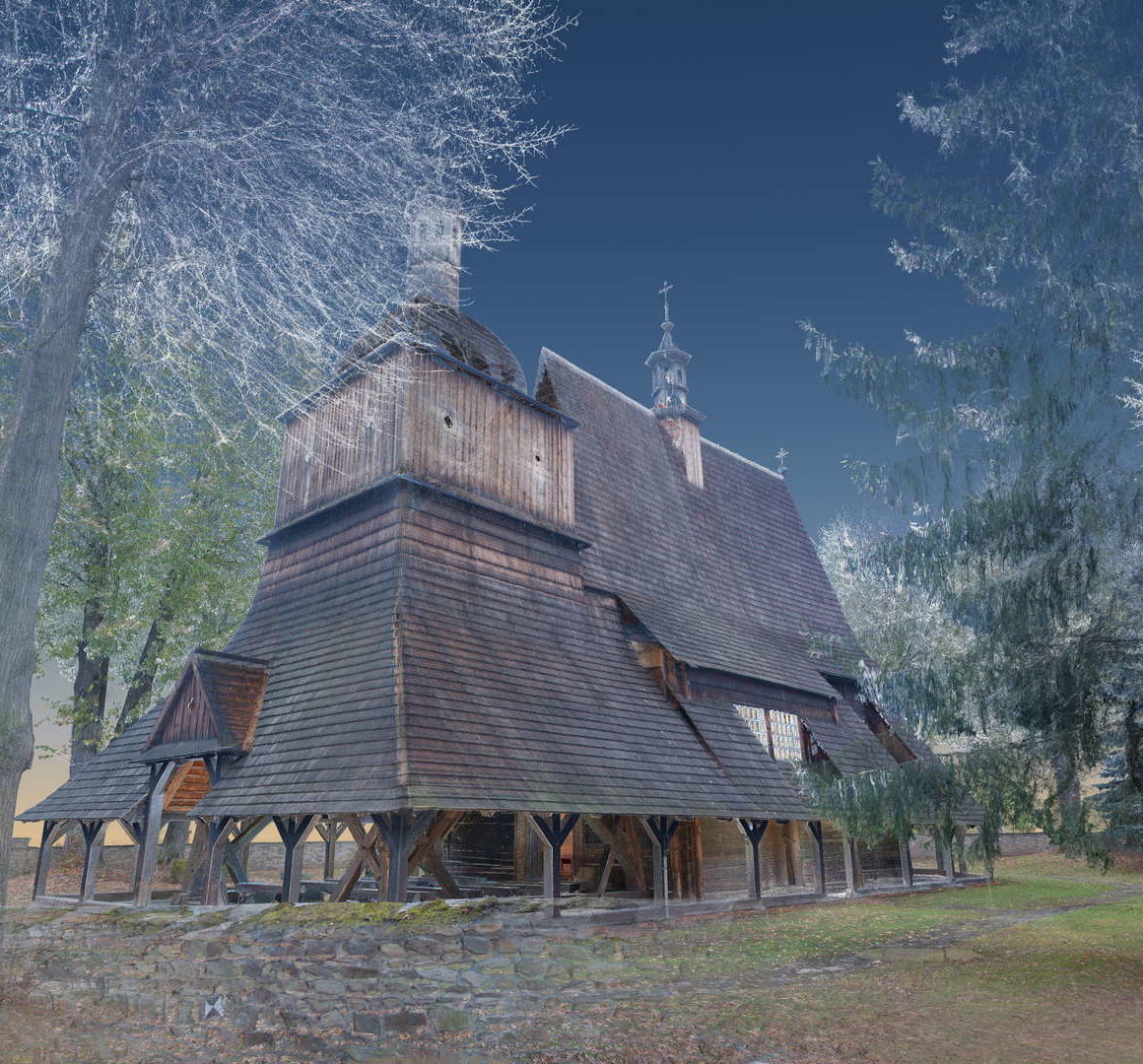 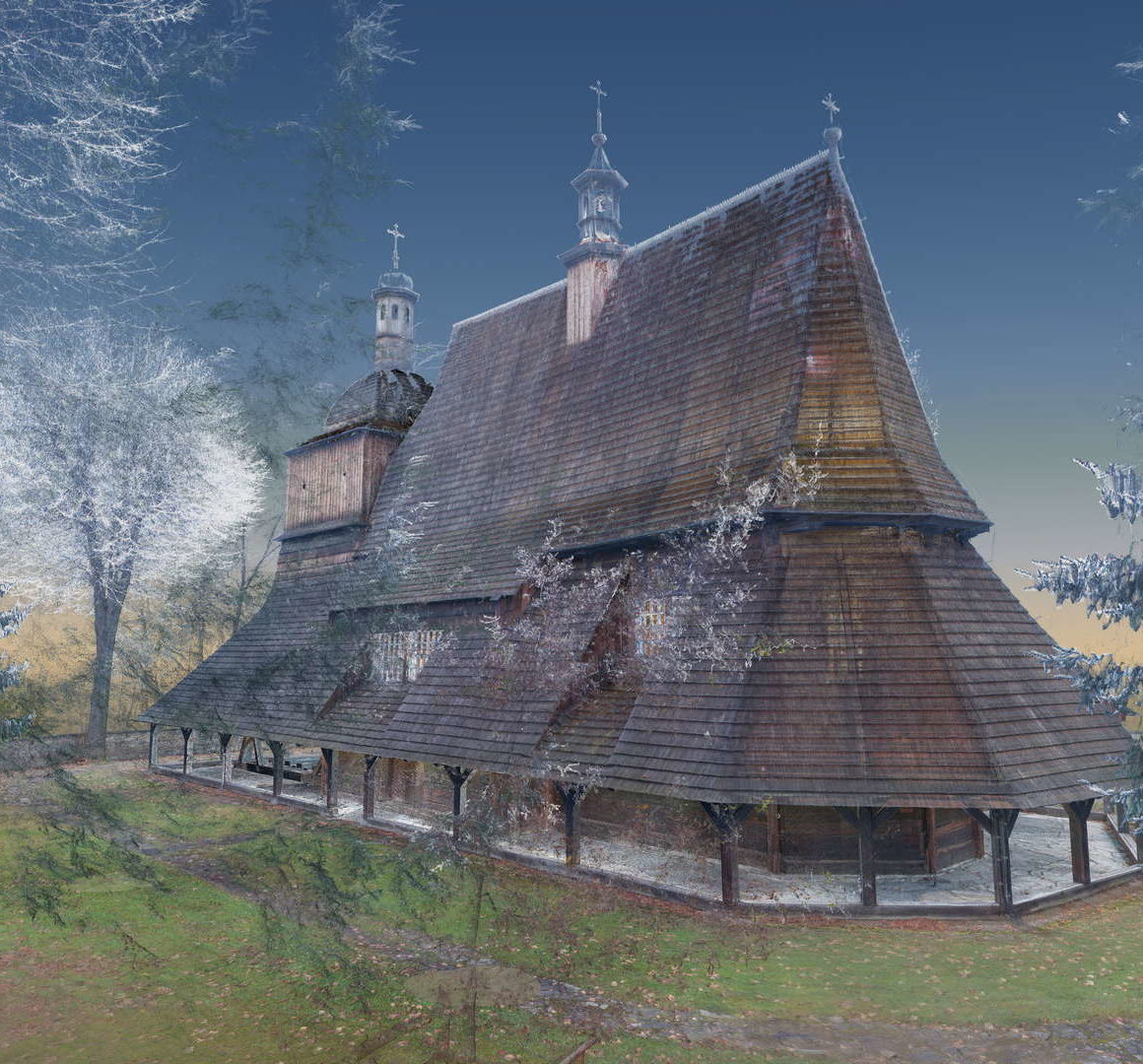 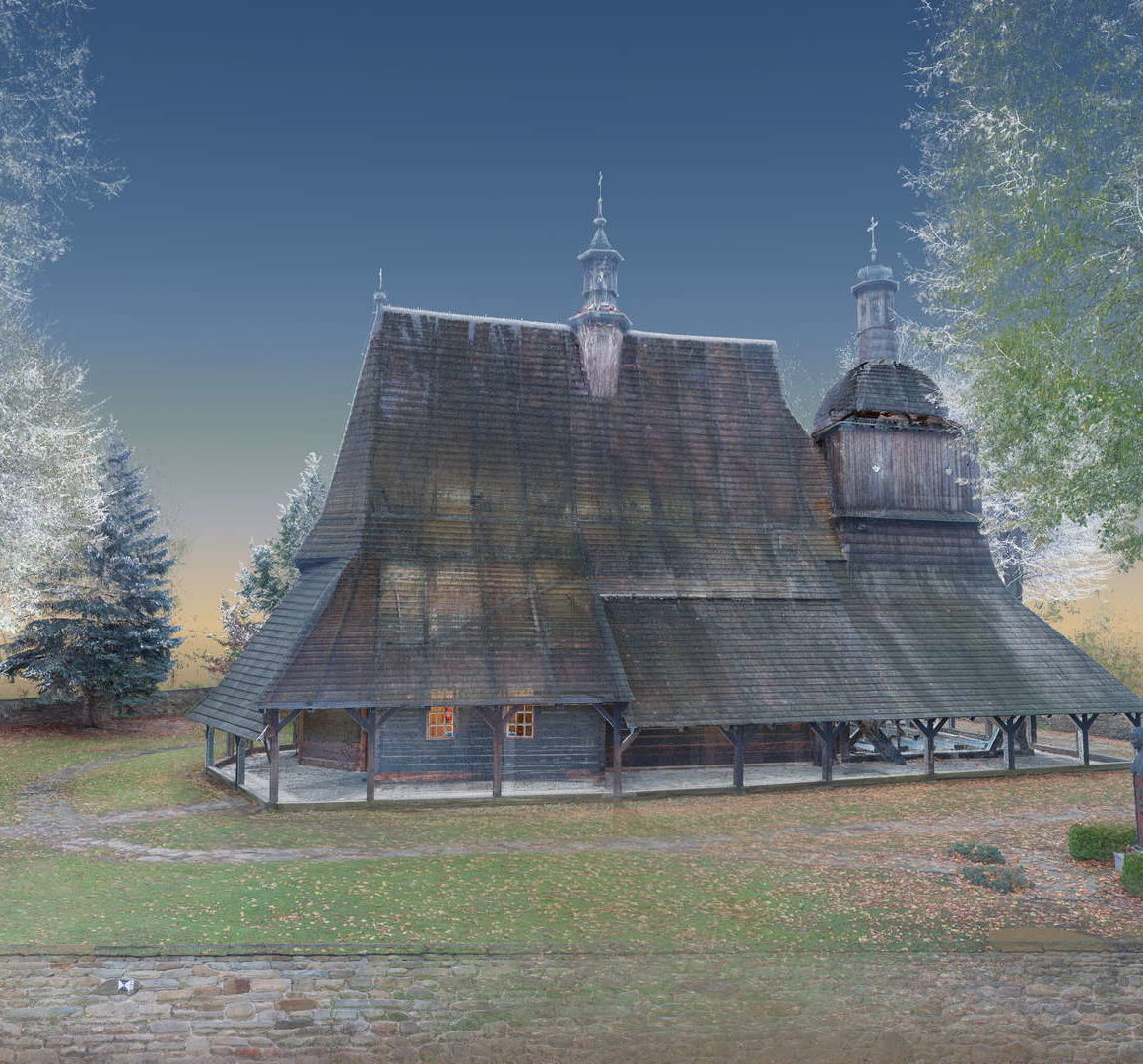 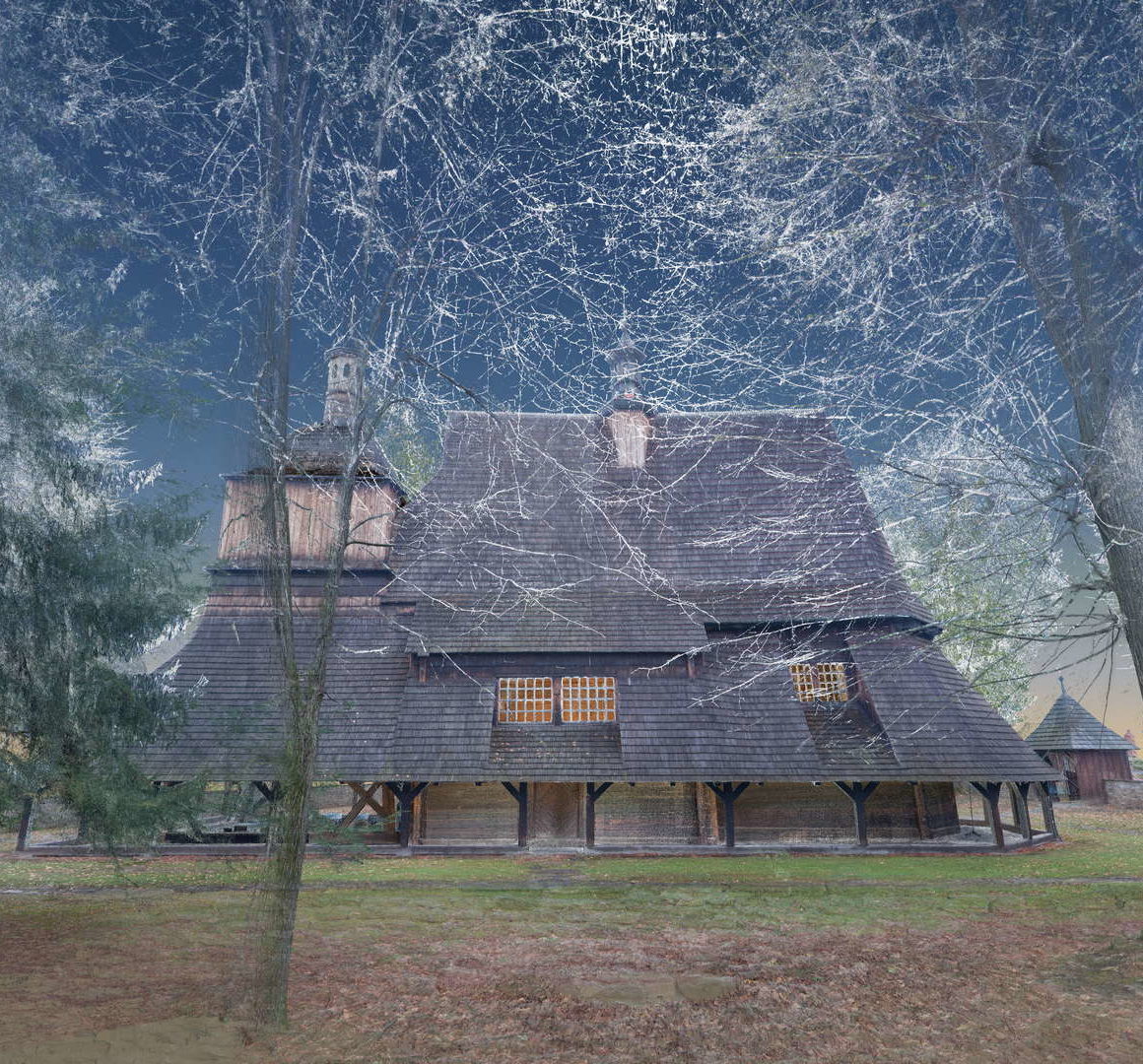 Destruction of the church during the First World War

At first sight, the church in Sękowa may seem disappointing as, compared to other wooden temples on the UNESCO list, this interior looks poor and empty. However, at the beginning of the 20th century, the temple in Sękowa was considered the most beautiful church in Lesser Poland. Unfortunately, the building (and especially its interior) did not survive the First World War. In the first half of 1915, Gorlice was the sight of trench battles; the decisive one started with an attack of German and Austro-Hungarian troops on May 2. The Battle of Gorlice resulted in the Russian front being broken on May 2-5, 1915. Since 2010, the battle of Gorlice has been reconstructed in Sękowa every year, attracting reconstruction groups from Poland and abroad. Unfortunately, the wooden church in Sękowa was one of the victims of the battles; the Austrian infantry shooting ditches were located about 250 m from the monument and the soldiers basically dismantled the church, using the boards for planking and as firewood.

The interior elements lost in 1915 included late-Renaissance altars, a pulpit and a matroneum with an organ case from the early 17th century. The altars housed 16th-century paintings showing: Saint Joachim and the Holy Family, Saint Anne and the Virgin Mary and Child (Hodegetria). It also included a fragment of a late-Gothic triptych from the 16th century with depictions of Saints Nicholas, Stanislaus, Lawrence, and Bartholomew. The bell with the date ‘1540’ has been irretrievably lost as well. A preserved photograph of the interior of the church from before the First World War shows that the painting hanging today in the main altar was originally located in one of the side altars.
The rich iconography of the church allowed it to be reconstructed. The temple in Sękowa is the first rebuilt wooden church in Poland. In 1994, the exemplary conservation work in the temple was awarded an international prize and the medal of honour by Europa Nostra. In 2003, the church was added to the UNESCO World Heritage List. 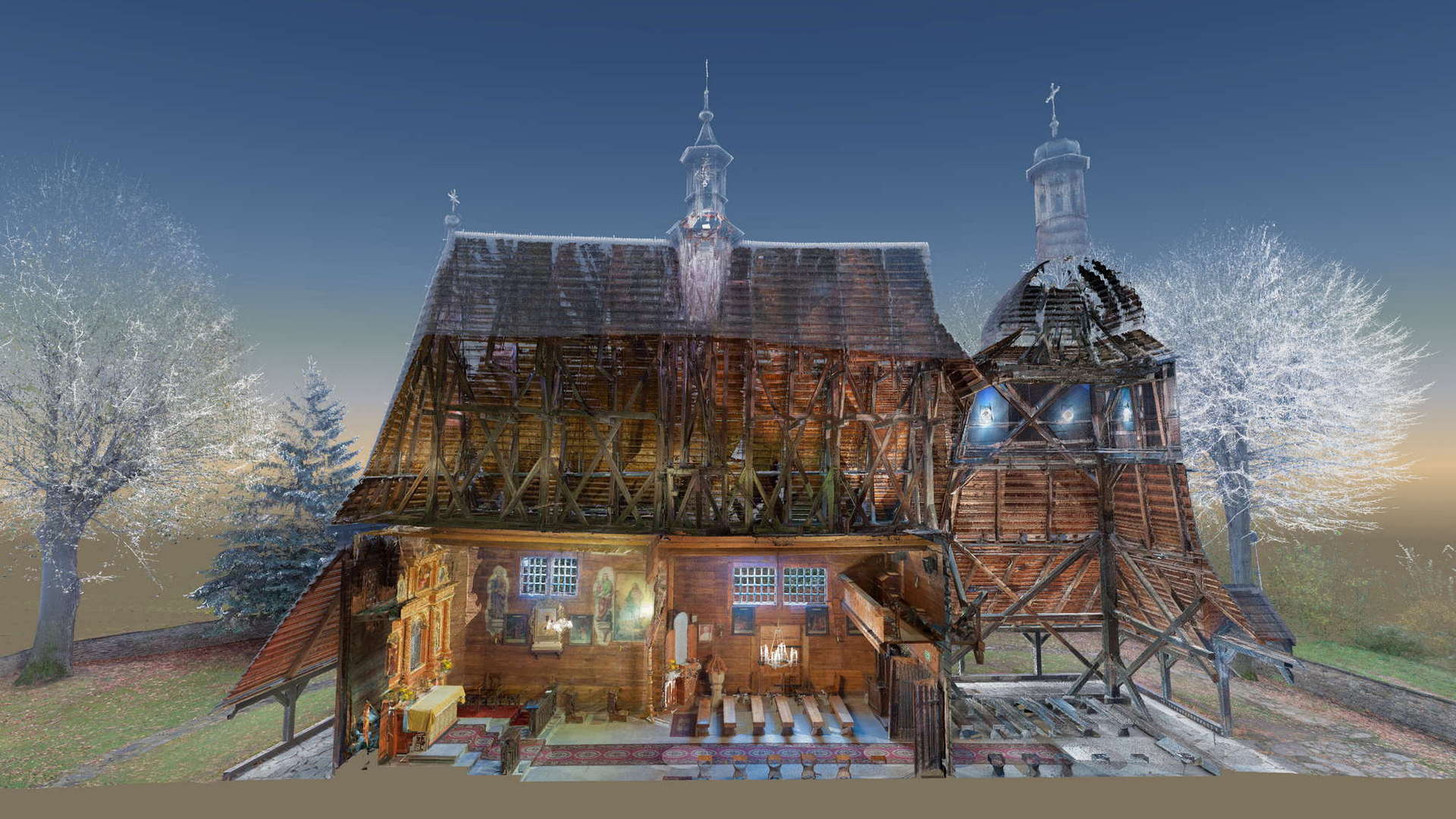 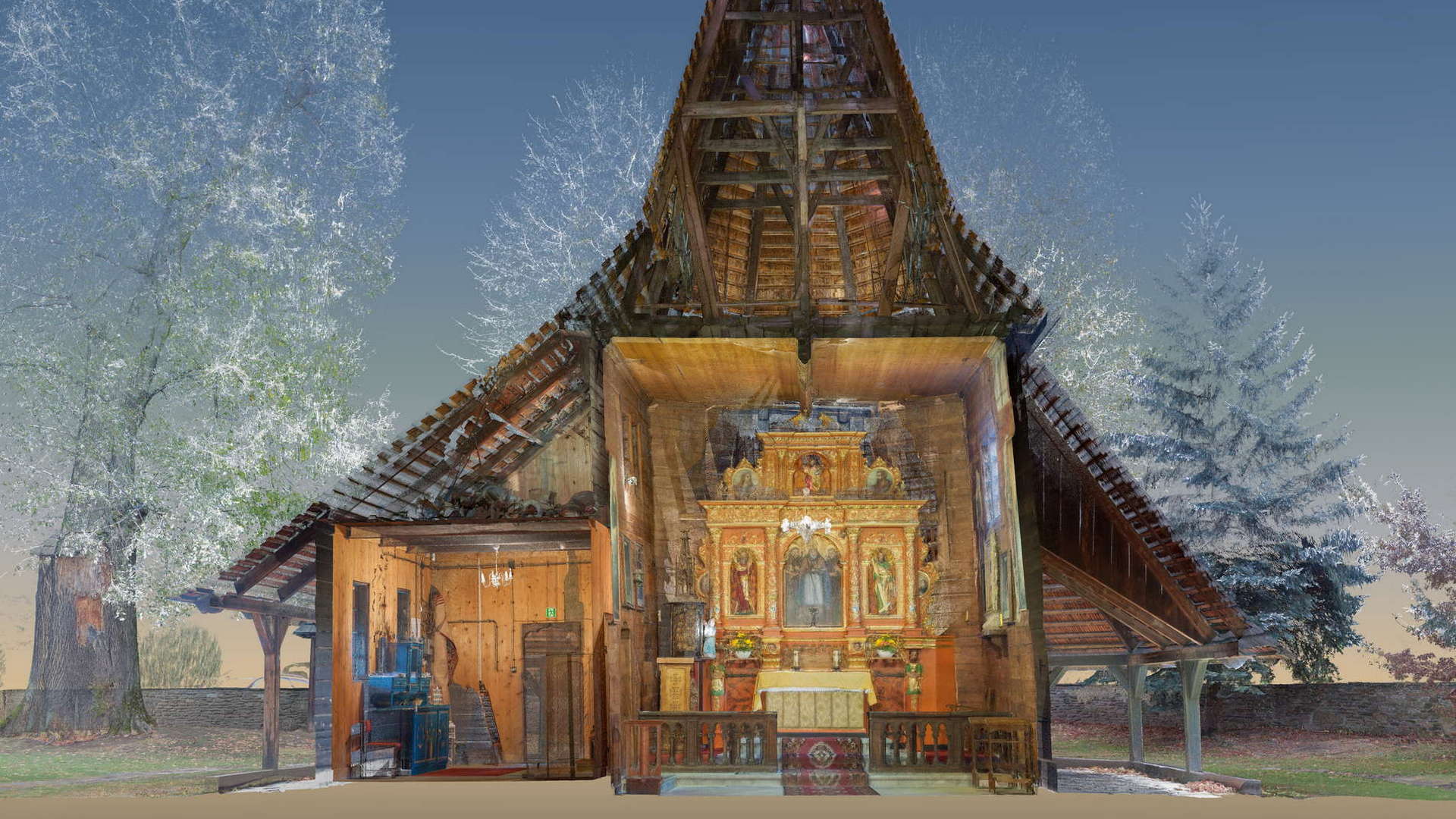 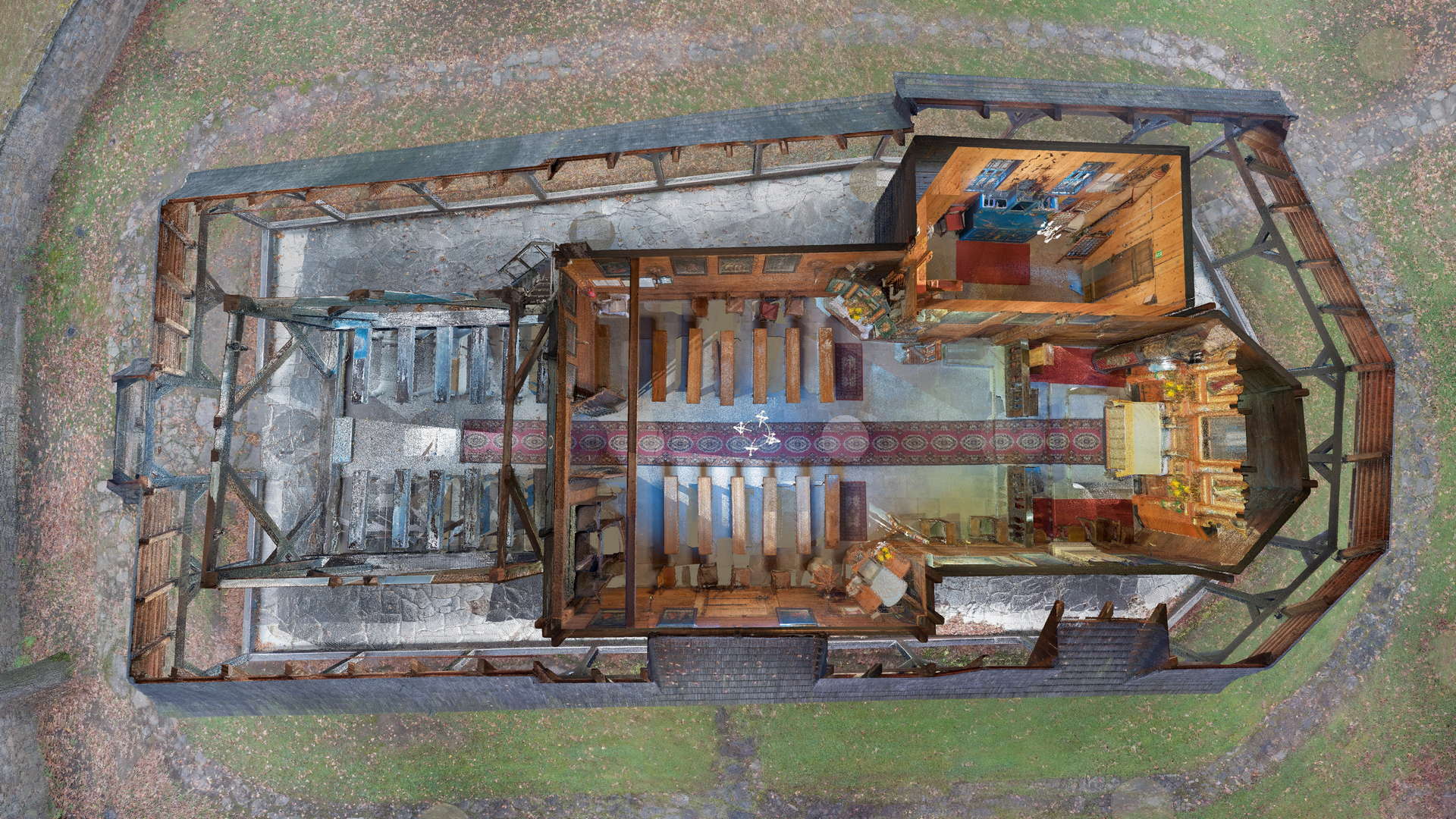 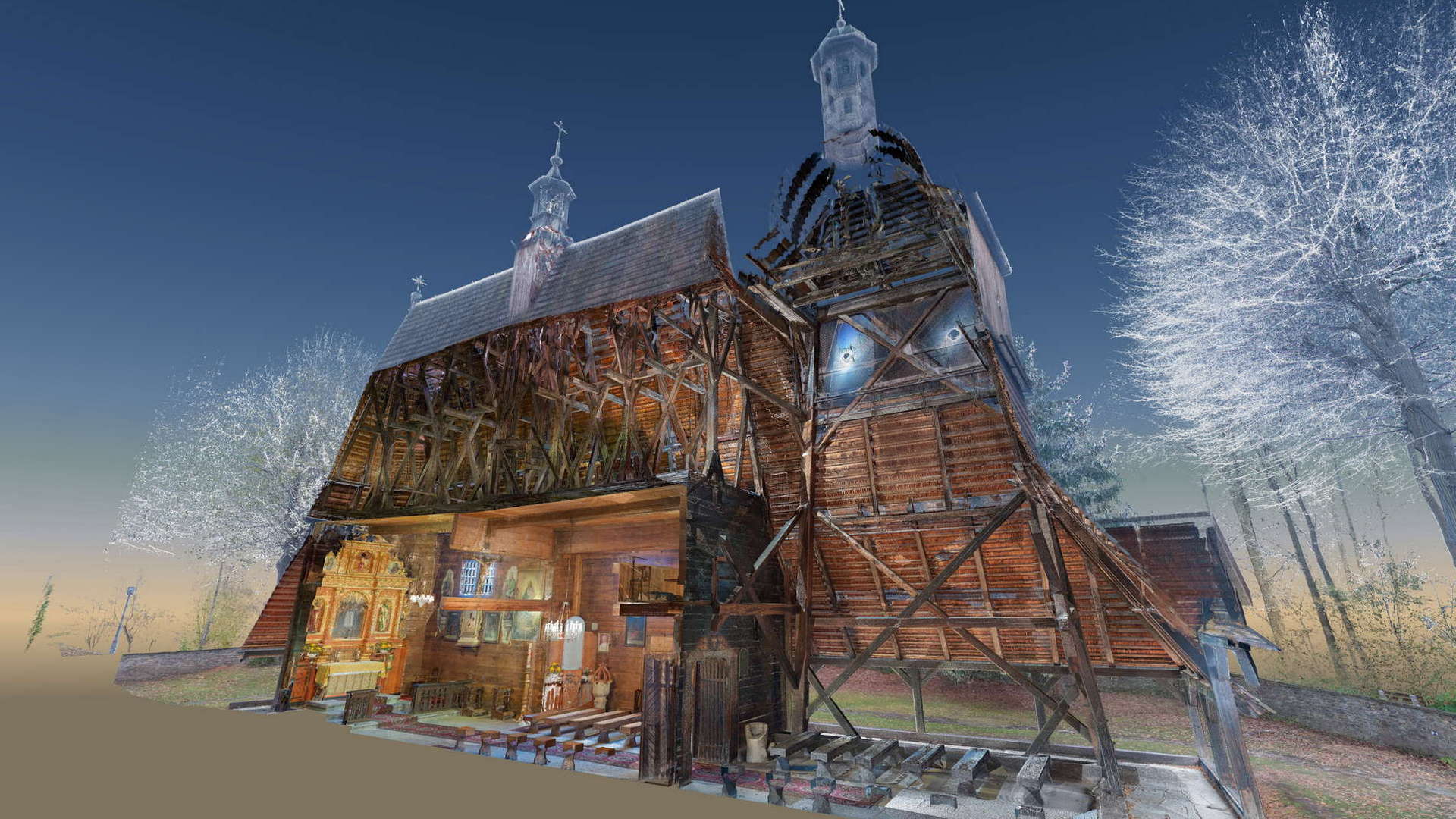 The originally rich interior of the temple was destroyed almost completely during the First World War; the late-Gothic stone baptism font from 1522 is the best preserved element. The present side altars were built in contemporary times (the last quarter of the 20th century), while the 17th-century main altar was reconstructed in the 1940s. The crucifix on the rood beam dates from the beginning of the 16th century.

The main altarpiece dates back to the beginning of the 17th century; its structure represents forms typical of Renaissance and Mannerist furniture. We can say that they are transitional forms between Gothic triptychs and Baroque altarpieces in the form of architectural structures. We are, therefore, dealing with an altarpiece that preserves the composition of late-medieval structures (it has a middle part, sides that depict wings, a finial and a predella). At the same time, however, it is not a winged altarpiece anymore, but it is decorated with architectural elements (e.g. columns). Although the altar was made after the Council of Trent (1545-1563), it is supported by a traditional predella (with the depiction of the Dormition of the Virgin), but it does not include the tabernacle required by the Council.

The painting placed in the central part comes from the 16th century and depicts St. Nicholas along with Saints Benedict and Anthony. On the sides, we can see figures of Saints Andrew and Peter (17th century), and the finial holds a sculpture of Christ the Saviour of the World (Salvator Mundi: Christ Blessing, holding an orb).

Later on, the interior obtained the images of the church’s patron saints (Saints James and Philip) painted in medallions, and depictions of Polish saints (Saint Casimir and St. Stanislaus Kostka) in half-medallions on the sides of the altar.

The predella shows a 17th-century carved representation of the Dormition of the Virgin in an archaic composition where the dying Mother of God is lying on a bed, surrounded by the Apostles. Information about the last moments of Mary’s life was taken from apocrypha, or texts that were not admitted to the Biblical canon. According to apocryphal sources, Mary died and was buried, and it was not until the third day after the funeral that Christ came to take her body to heaven. Admittedly, the concept of the Assumption of the Virgin with her soul and body became popular even at the dawn of modern times, and this is how artists started to show Mary’s last moments, even though the dogma was not accepted until the mid-20th century. The church in Sękowa, however, shows a depiction according to the medieval tradition (known in Byzantine art as Koimesis).

According to legend, the Apostles gathered around the bed of the dying Mary despite the fact that, at that time, they had already been scattered all over the world because, at her request, they were miraculously transported by angels to accompany the Mother of God in the last moments of her life. 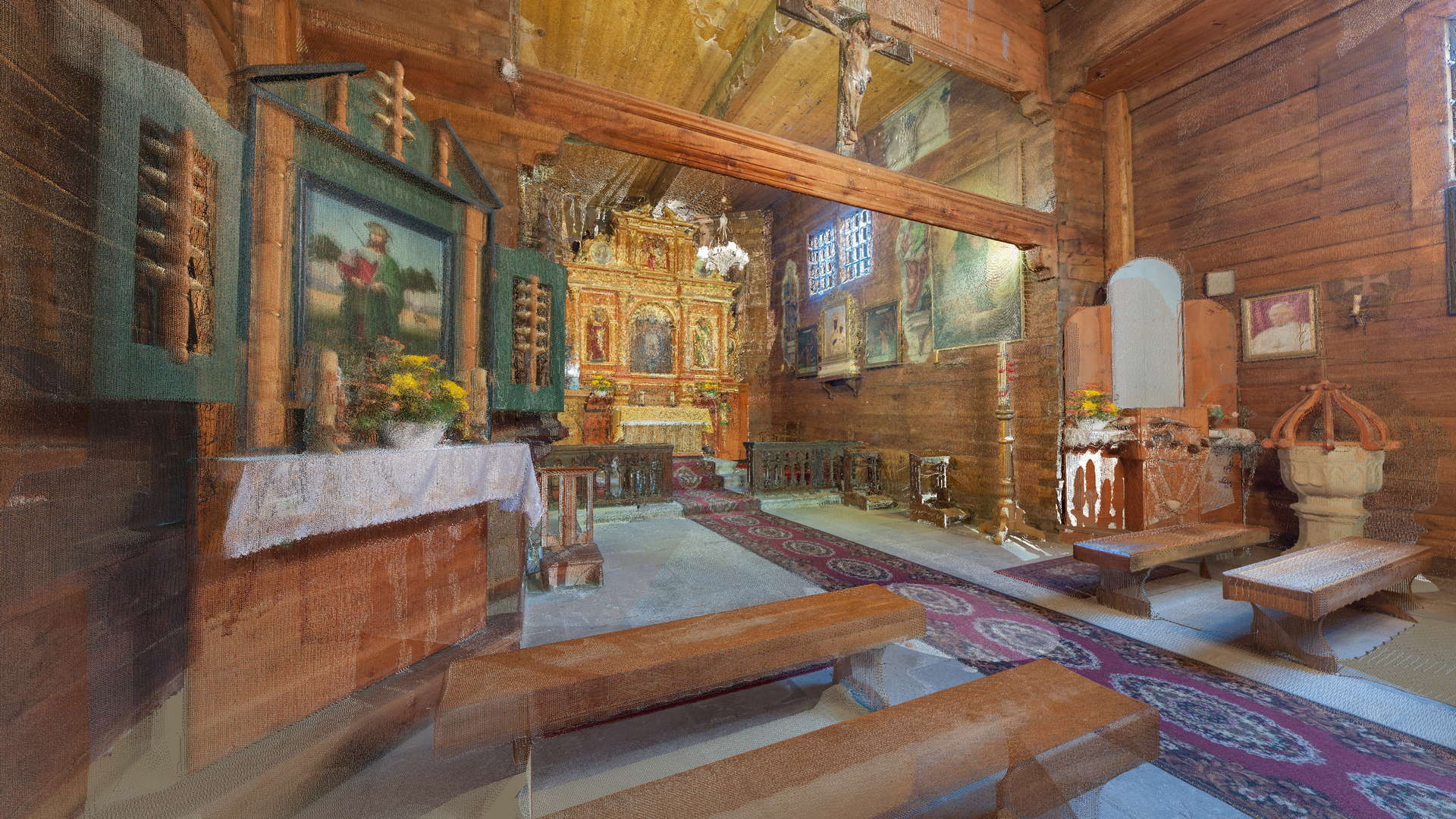 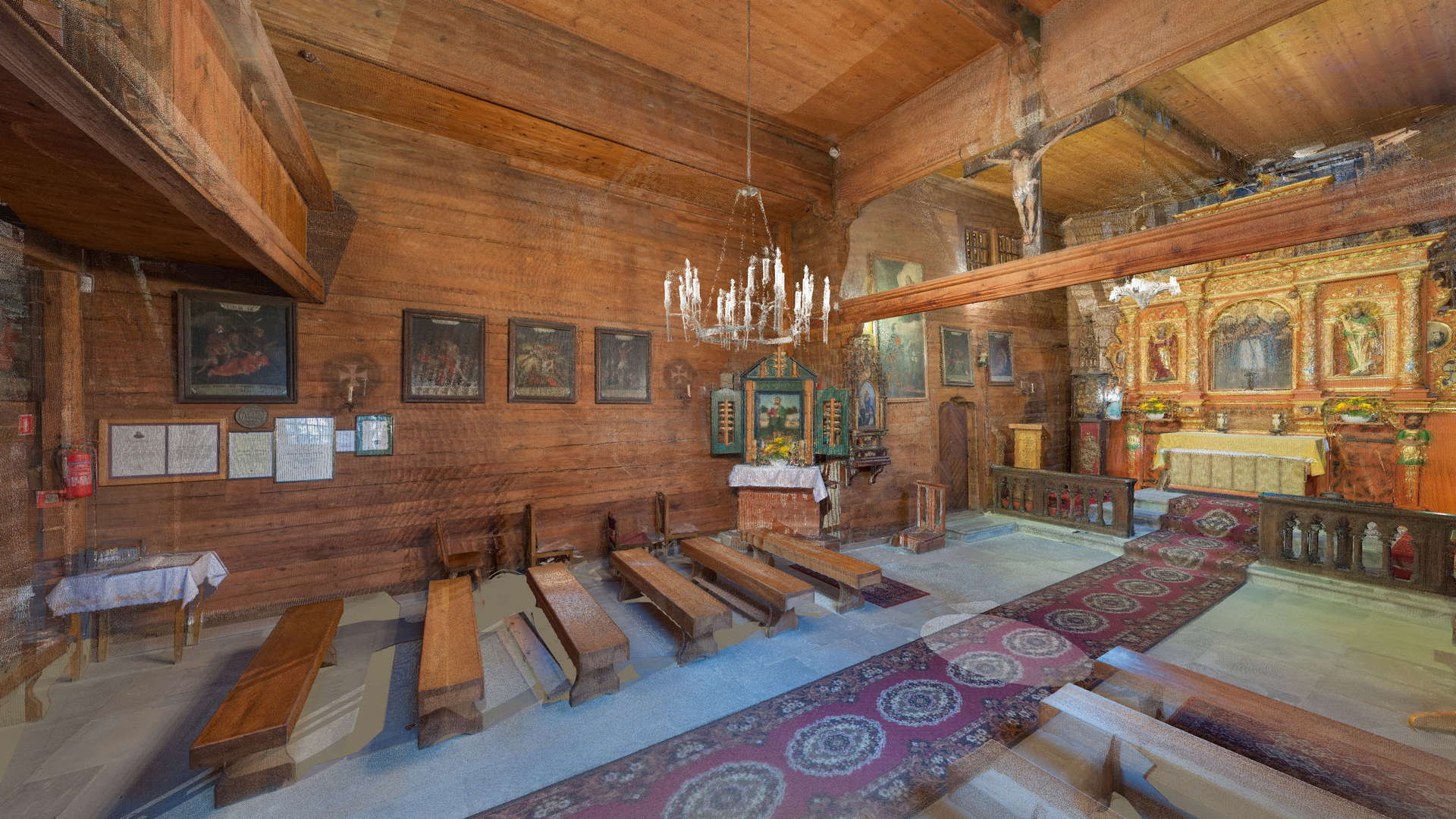 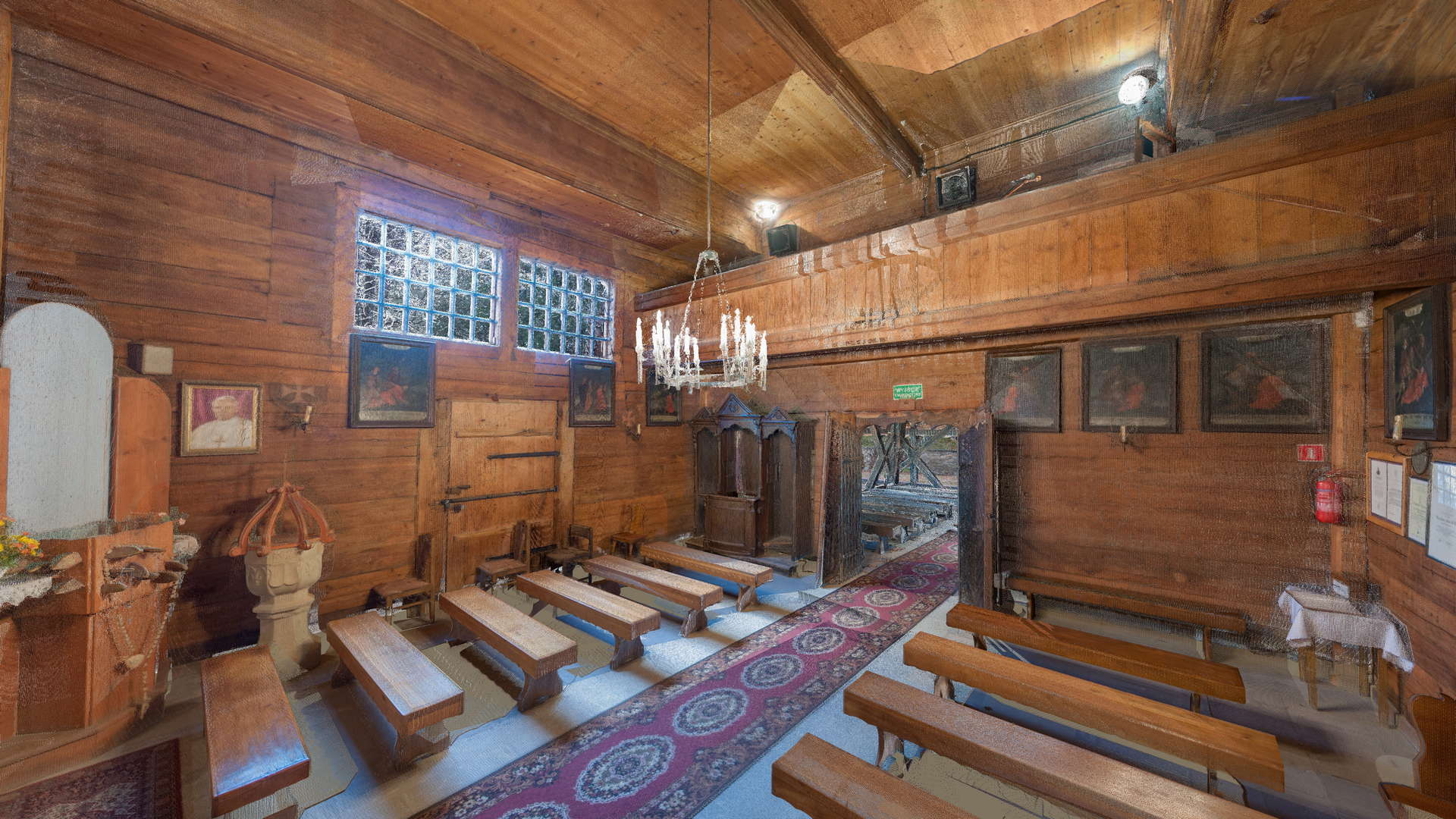 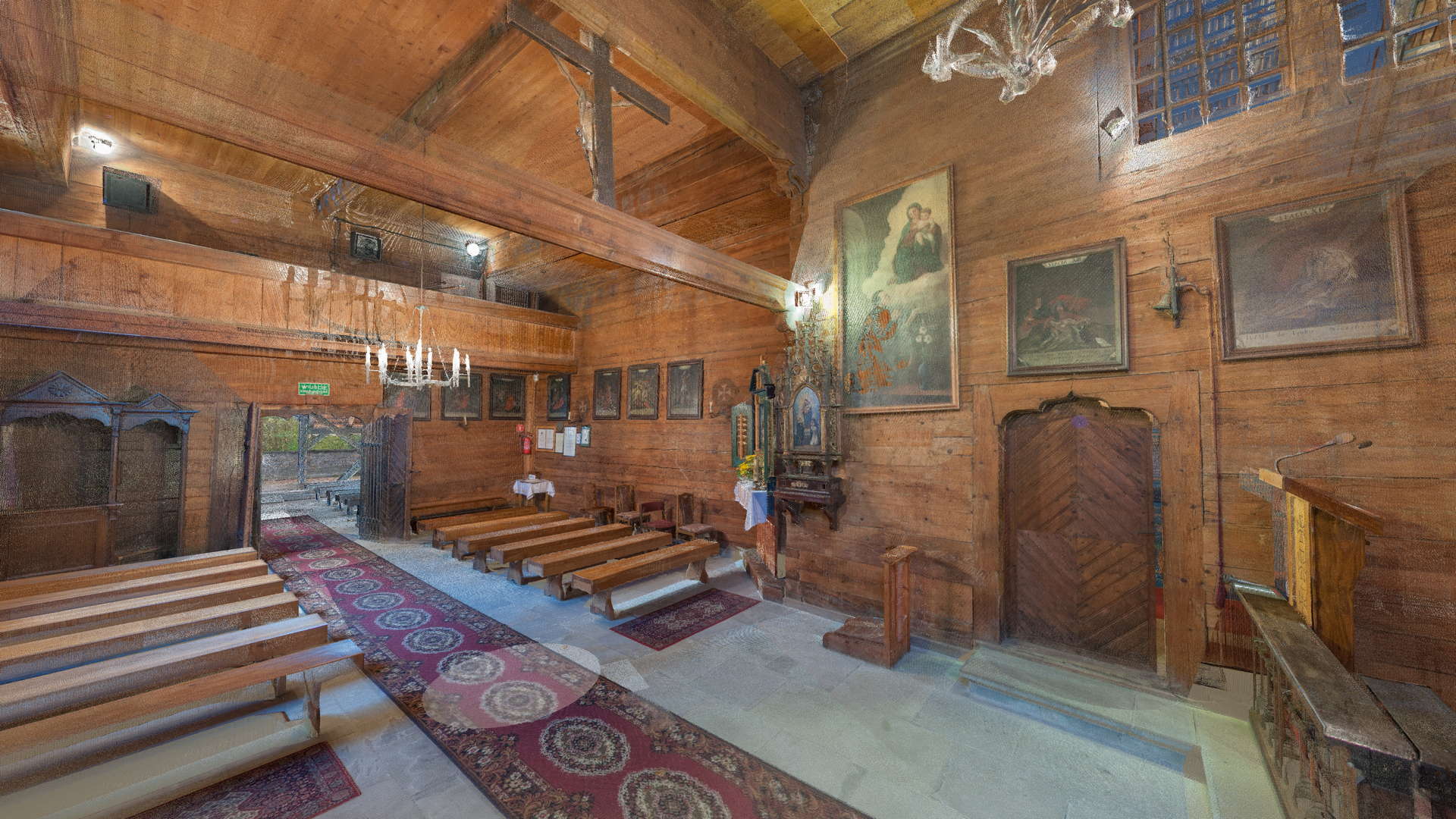