The church’s walls, the matroneum and the ceiling are decorated with late-Gothic paintings dating back to the turn of the 15th and 16th centuries. They are patterned decorations, created using templates. Rhythmically repeated decorative motifs form geometric and floral ornaments with a total of 77 motifs in 12 layouts, using over 30 colours. They are interspersed with little hunting scenes and the silhouettes of deer. According to medieval bestiaries, or books that described various animals, the deer is an enemy of the serpent. It was believed that the deer pulls the serpent out of its hideout and eats it, and then drinks water, thereby rejuvenating itself, with this thread associated with Jesus luring the serpent-Satan out of a hiding place. The biblical verse from the Song of Songs (Song 2:9): “My beloved is like a gazelle or a young stag” was also understood as relating to Jesus the Bridegroom. The deer was also a symbol of Sol Invictus (Unconquered Sun, an ancient deity associated with Jesus by Christians), because its antlers were related to the symbolism of light and solar rays. The deer seeking a hidden spring was compared to a soul that seeks God; hence the deer is also associated with the symbolism of baptism.

In addition, it was said that deer, when travelling in groups, put their snouts on one another and support each other in this way, which was seen as a symbol of the joint action of Church members. In addition, the paintings in the church in Dębno include heraldic depictions of the White Eagle (above the crucifix on the rood beam) and St. George fighting against a dragon (in the chancel). According to legend, St. George was a knight who killed a dragon. Portrayals of George are sometimes confused with the image of Michael the Archangel fighting the devil, also often portrayed in the form of a dragon. Although the church in Dębno is dedicated to St. Michael, the painting depicts St. George: first of all, the main character does not have angel wings and, second of all, he is sitting on a horse, while Michael was always shown fighting “on foot”.

Patterns similar or identical to those in the church in Dębno can be found among the decorations of the churches in Łopuszna and Harklowa. The patterned ornaments were possibly the work of travelling artists as similar decorations were used in churches in Silesia or Upper Hungary (present-day Slovakia). 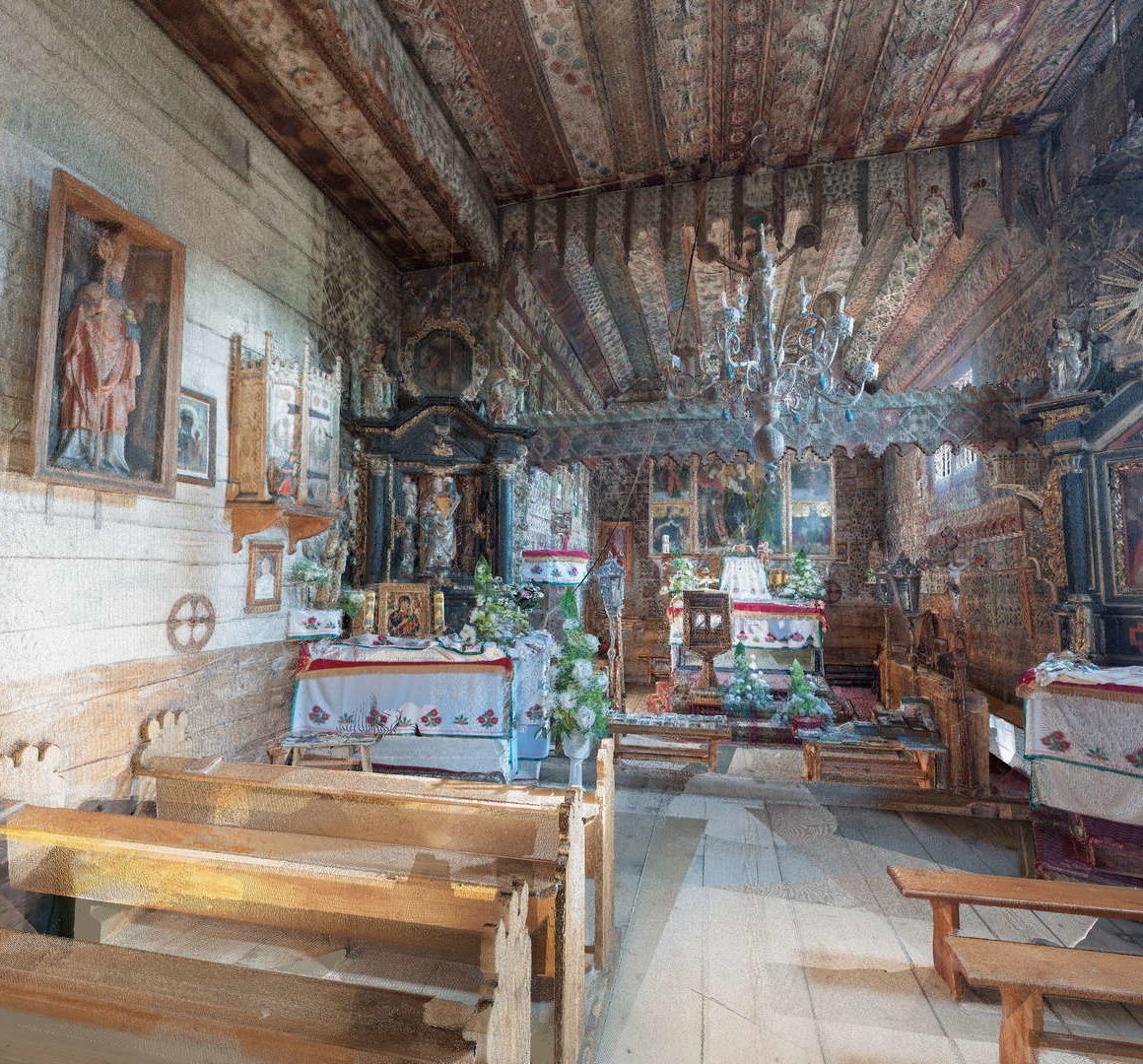 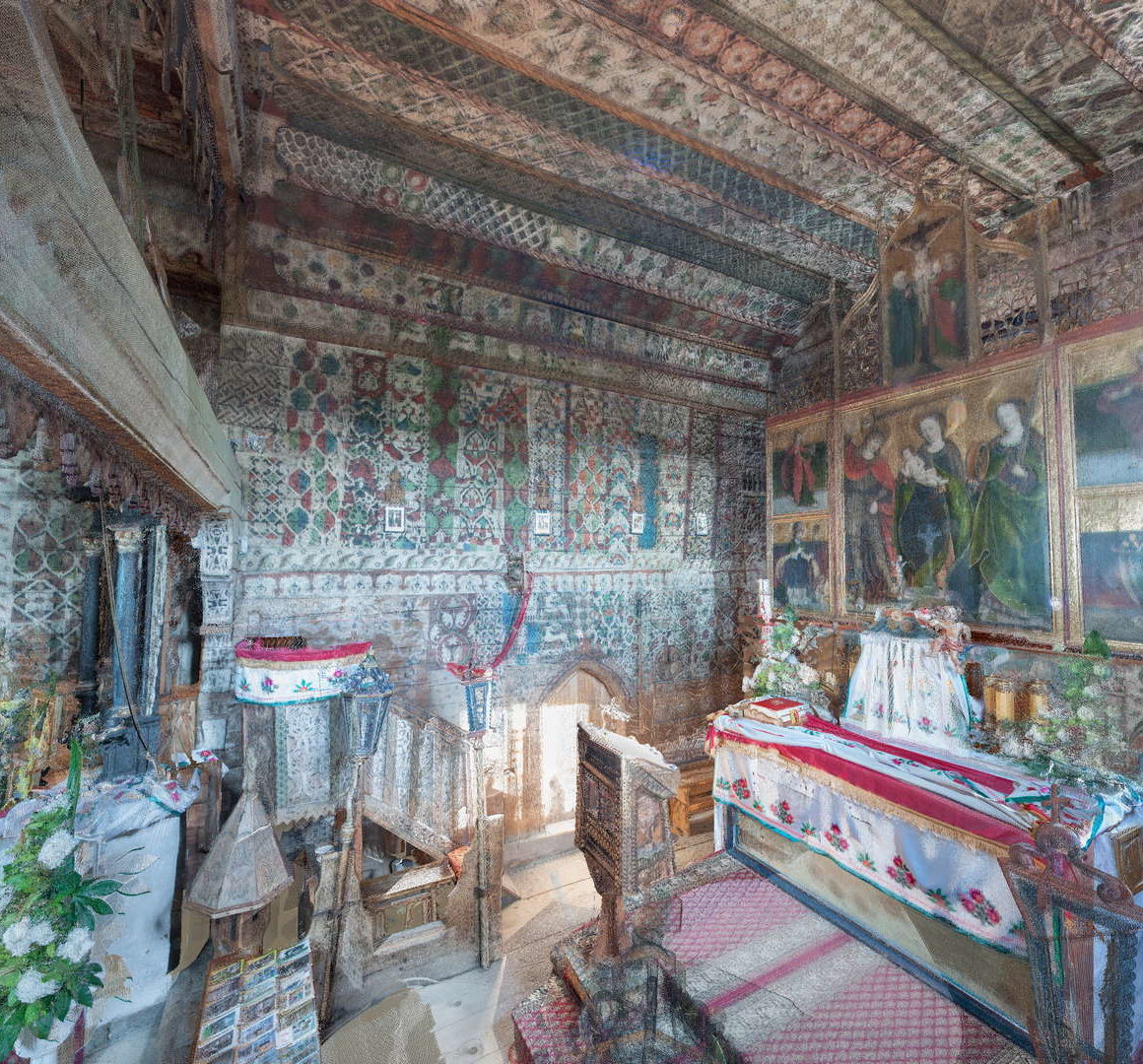 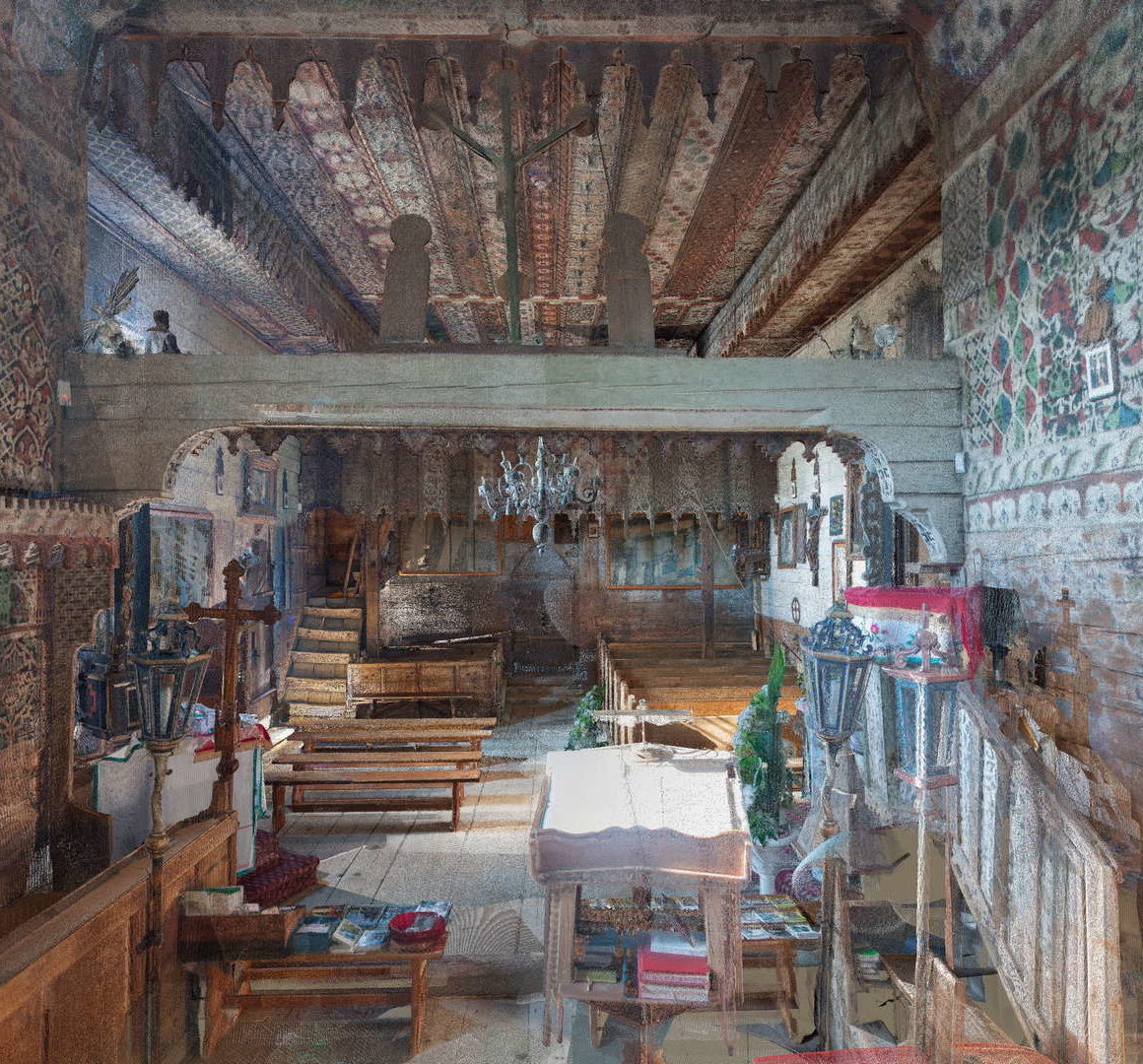 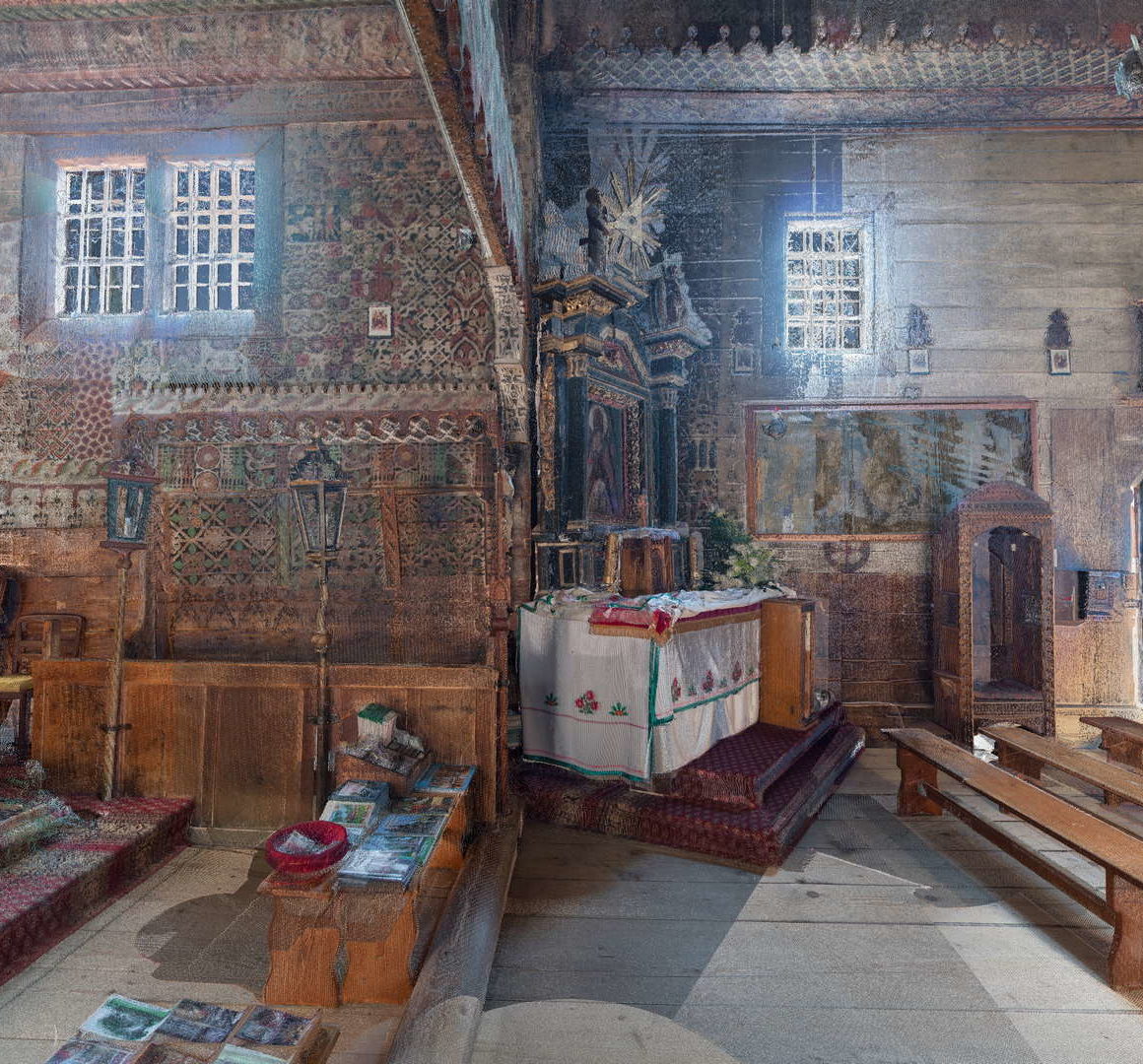 The altarpiece of the main altar in the church in Dębno has the form of a late-Gothic triptych. Painted with tempera paints on linden boards, using gold and silver foil, it was built at the beginning of the 16th century, or at least the majority of it was. The central part (172 x 140 cm) and the obverse (inner parts) of the wings (172 x 71 cm) date back to around 1505-1510 and are attributed to a painter called the Master of the Holy Kinship. The finial and the reverse (outer parts) of the wings are younger, being created around 1530-1540, while the predella may come from the turn of the 17th and 18th centuries.

What is a triptych?

A triptych is a type of altarpiece consisting of a middle panel and two side panels that can be folded, a finial, and a platform called a predella. These types of altarpieces were very popular in the late Middle Ages, especially in the 15th and early 16th centuries. The movable wings decorated on both sides allowed the contents presented in the altar to be changed: the open triptych was more representative and we call it a “Sunday” or “Holiday” opening, while the closed altar was used on weekdays and during Lent or Advent. Hence, a Holiday opening is usually more richly decorated, often with a golden background, while everyday openings are more modest and more sparsely decorated.

The middle panel of the Dębno triptych shows the so-called sacra conversazione, in other words “holy conversation”. However, a better translation would be “holy community”, since this type of depiction is associated with a belief in the communion of saints and, in this context, the term conversatione can be found in texts from the 13th and 14th centuries. Sacra conversazione is a depiction of the Virgin and Child amidst a group of saints, often from different eras, forming a community of saints in heaven. This iconographic type developed in Italian art in the early 14th century and became popular in the following century. In the case of the Dębno altarpiece, Madonna is accompanied by St. Michael the Archangel (patron saint of the church) and St. Catherine of Alexandria. Both these characters have a sword as their attribute: Catherine was martyred (beheaded with a sword), while Michael the Archangel was depicted with a raised sword, striking a blow to the devil, whom he was said to have overcome as the commander of the Heavenly Host. In addition, Michael’s role is to weigh the good and evil deeds of every soul on Judgement Day; therefore, he has a pair of scales as his second attribute. On one scale, we can see a small man representing a just soul. His merits cannot be outweighed even by the millstone lying on the other scale, additionally weighed down by little devils clinging to the pair of scales.

The raised sword and the armour, as well as the pair of scales, are enough to identify the young man as St. Michael. The artist did not paint his wings in this case, since it might have considerably increased the density of the painting’s composition.
The inner parts of the triptych wings also depict saints: in the upper part, we can see the two St. Johns, and in the lower part: two bishops, Stanislaus and Nicholas. In accordance with tradition, John the Evangelist was portrayed as a young man with no facial hair; with a chalice in his hand as, according to legend, he drank a cup of deadly poison, but remained alive. John the Baptist, on the other hand, has a beard and moustache, wearing animal’s skin with an outer toga-like garment of cloth, which is a reference to his life as a hermit. He is pointing to a lamb he is holding on a book: it is a reference to the words “Behold the Lamb of God” that John the Baptist used to define Jesus. Saint Nicholas’ attributes are three golden balls which, according to legend, symbolise the dowry of three pieces of gold that Bishop Nicholas gave to three poor girls, coming surreptitiously to them three nights in a row and tossing them a bag of gold each night. Meanwhile, at St. Stanislaus’ feet, there is a man rising from the grave: it is Piotrawin (Piotrowin) who, according to legend, was resurrected from the dead by the Bishop of Kraków. 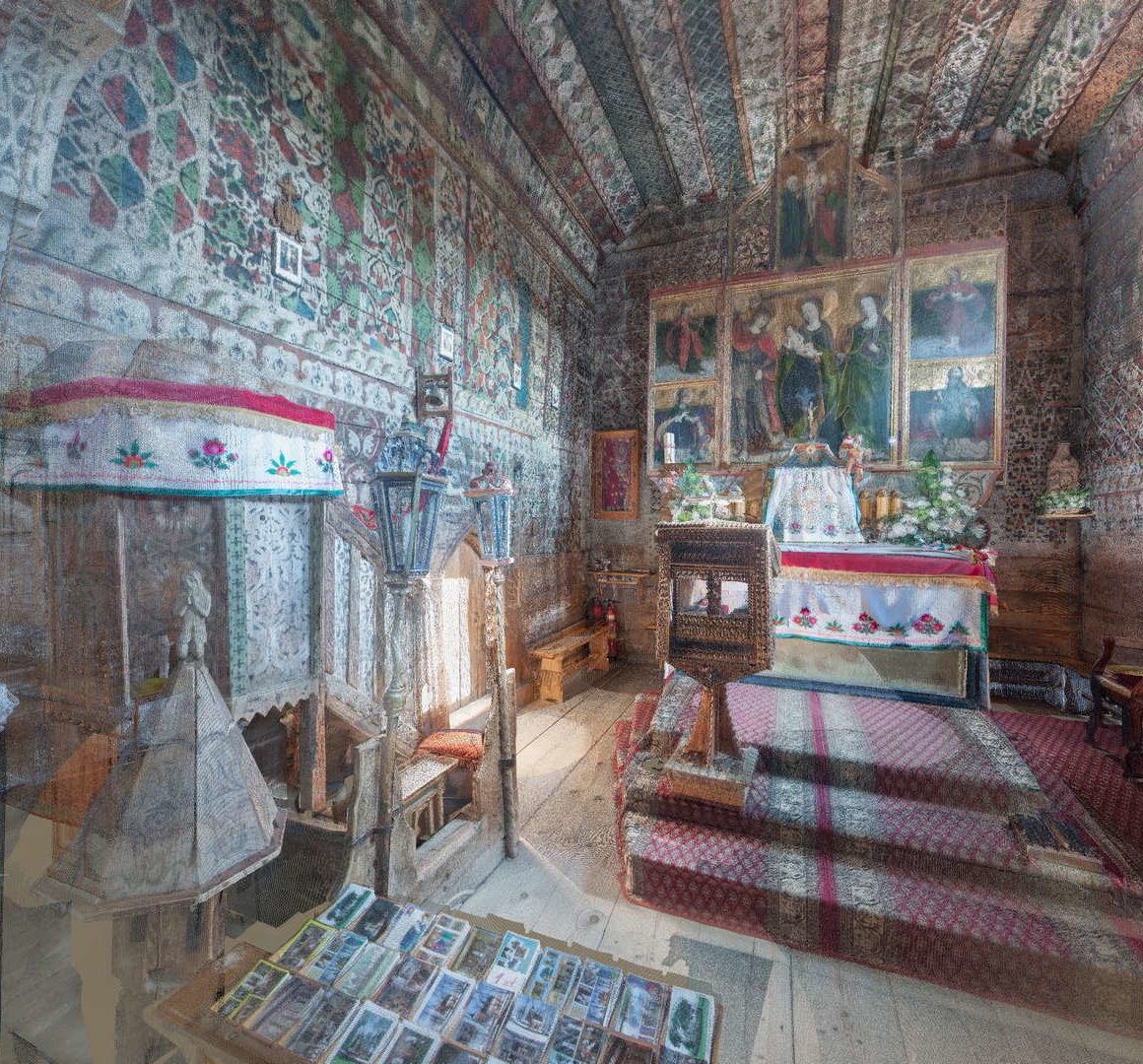 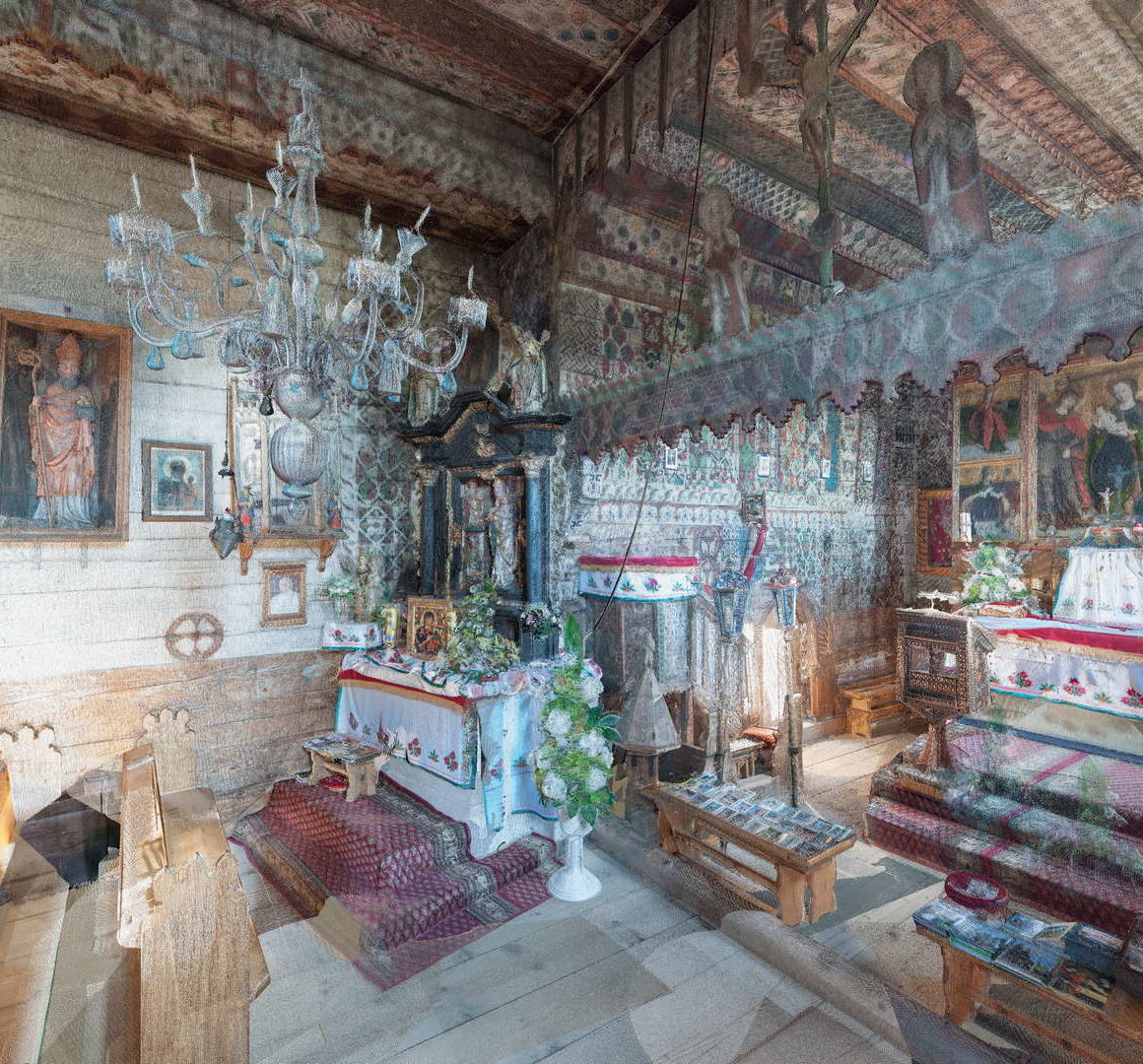 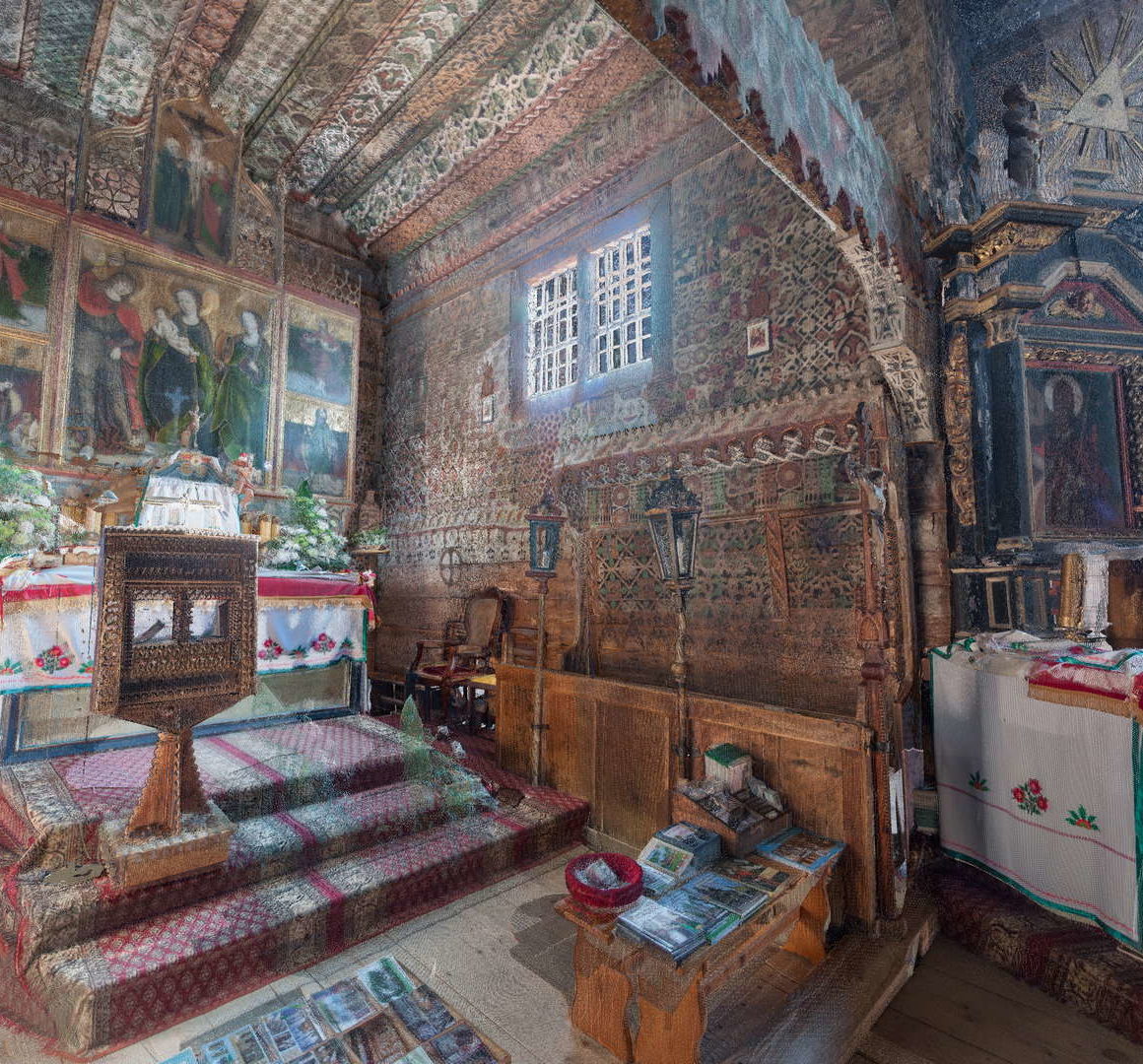 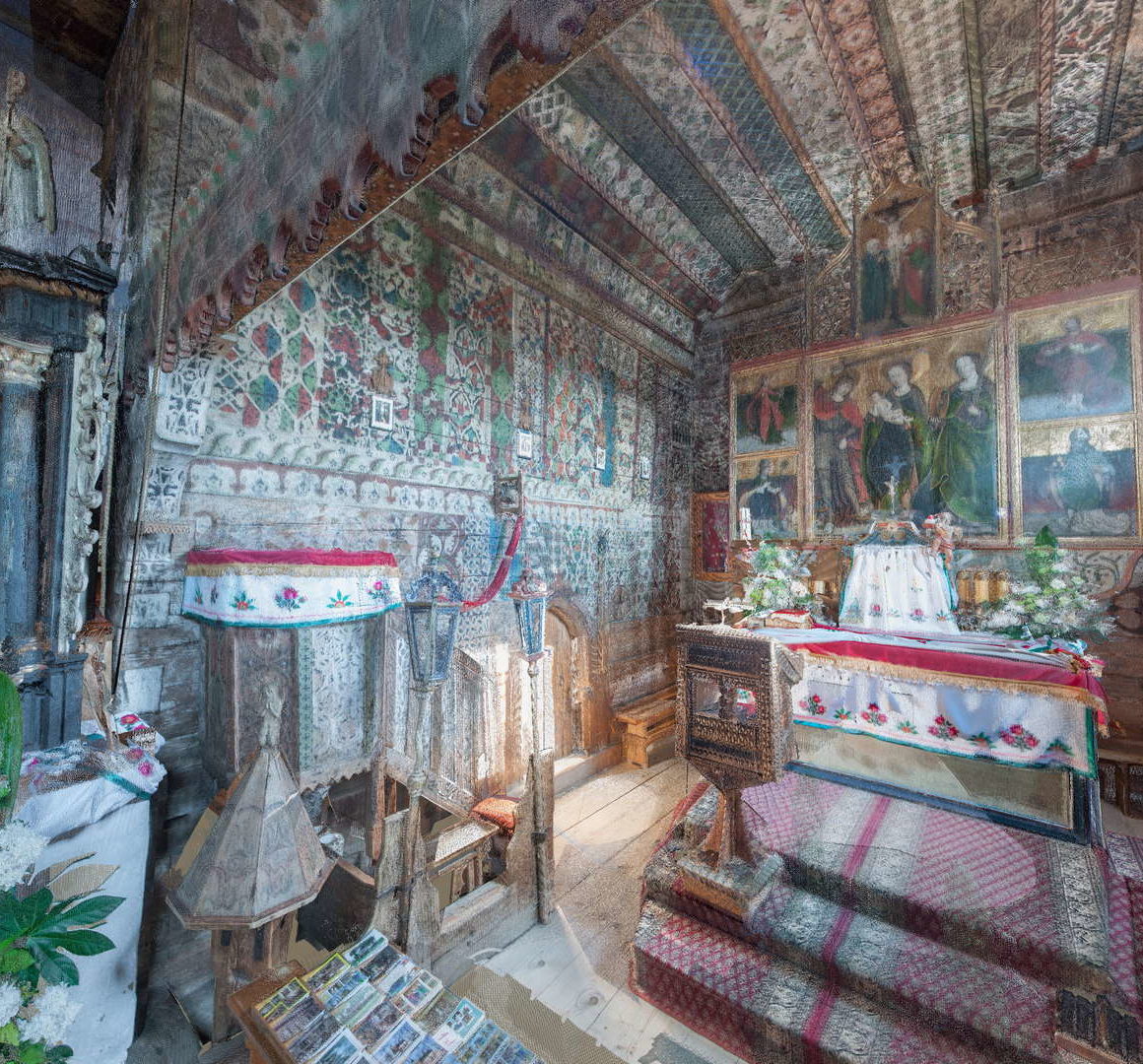 Master of the Holy Kinship.

An anonymous painter, referred to as the Master of the Holy Kinship, ran one of the most active workshops in the Kraków region in the first quarter of the 16th century. Modern researchers associate over 20 preserved works with him. The painter would depict figures with serious facial expressions, often with drooping mouth corners; the faces he painted had expressive and long noses, straight or slightly aquiline. The Master would frequently paint his characters wearing fancy headgear, with his works showing men’s hats or women’s mob caps in interesting shapes. When we look closer, there is another characteristic element with eyebrows showing a “herringbone” pattern; according to Jerzy Gadomski, the Master also specialised in an effective technique of painting glossy hair and coiffed beards. Shimmering golden curls are particularly eye-catching in the young long-haired men (often with a fringe) painted by the Master of the Holy Kinship. Archangel Michael from the triptych in the Dębno church is an example of such a figure.

The expressiveness of the works by the Master of the Holy Kinship is hidden both in the expressive faces of the characters he painted and in their robes. The sharp, dynamic, and dispersed folds look almost like bent metal sheets: hard forms seem to be independent of the body shapes they cover. This is a late-Gothic style rooted in 15th-century Early-Netherlandish art, which was popularized in the Kraków circle through the work of Veit Stoss. The Master of the Holy Kinship almost certainly followed the model of St. Mary’s Altar in Krakow: the saints depicted in the Dębno triptych are clothed in robes whose folds have shapes very similar to those in the work by Veit Stoss. For example, the cloak of Saint Stanislaus from Dębno is arranged in the so-called “spoon-like” folds (stiff, rounded, large tails surrounding the figure), while the cloak of St. John the Baptist from Dębno is wrapped around its own axis, creating the so-called “rotational” fold. 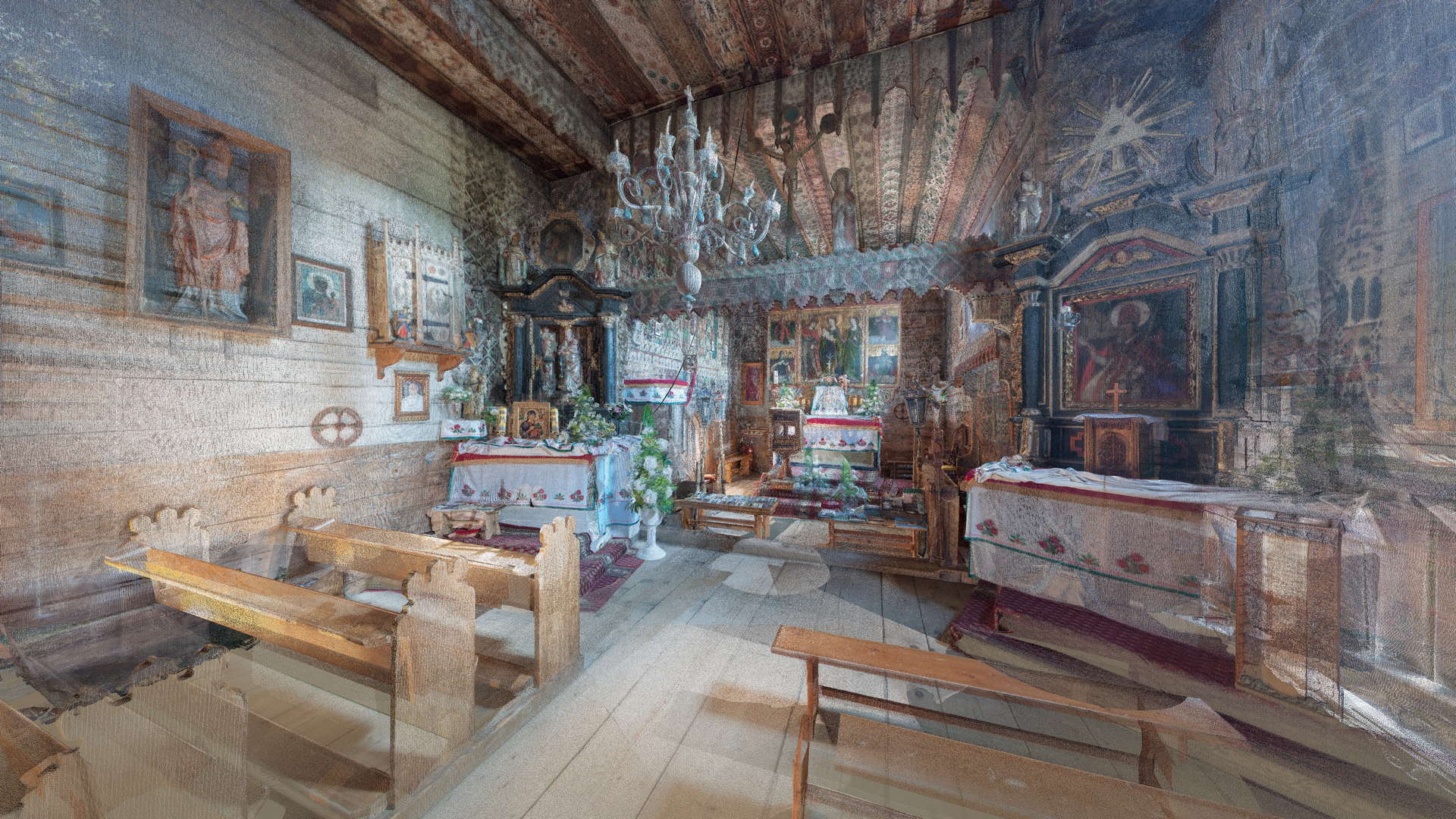 Fun fact: miraculously preserved paintings of the Master of the Holy Kinship.

Several other paintings of sacra conversazione from the Master of the Holy Kinship’s workshop miraculously survived the fires of the churches they were in. Two paintings from a wooden church in Łękawica (Madonna with Saints Andrew and Peter, and Madonna with Saints Nicholas and Stanislaus) are now deposited in the City Museum in Żywiec; the church itself was completely burnt down in 1992 when a fire probably started because of incense.

Another painting, with Madonna and Saints Martin and Urban, was hung in the former wooden church in Pisarzowice. There, unreported and non-supervised renovation works carried out in the temple in 1965 started a fire as well, but the parishioners were able to take the painting of the Master of the Holy Kinship out of the burning church. Last but not least, another painting by this author, depicting Madonna and the two Saint Johns, came from a wooden church in Komorowice.

The temple was transferred to Wola Justowska in Krakow and burned there twice: in 1978 as a result of an electrical fault, and then again in 2002, after it had been reconstructed. This time, the painting survived, because it stayed in Komorowice when the old church was moved to Krakow.

In 2007, Katarzyna Bury, at the time an art history student at the Jagiellonian University, found a previously unknown painting of the Master of the Holy Kinship on Allegro.pl (Polish online auction service). Someone placed a board, with the remains of a Gothic painting, for auction online. It turned out that there were five similar panels and they were elements of a painting by the Master of the Holy Kinship, depicting the family of the Virgin Mary. The panels come from an unknown church near Pilica, where they served as drawer bottoms in a sacristy wardrobe. Currently, they are part of a private collection and their owner decided not to sell them on the Internet. 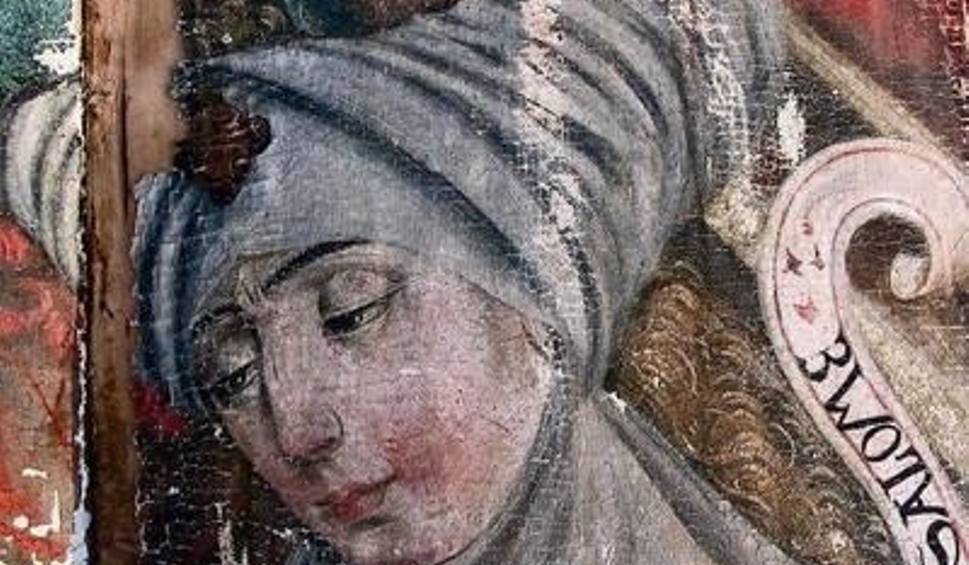 Finial, predella and the reverse sides of wings.

The Crucifixion on the altar’s finial in Dębno and the Passion cycle shown on the reverse sides of the wings were made later, probably in the 1530s. The Passion cycle consists of depictions of Jesus in Gethsemane, Ecce Homo, Flagellation, and the Fall under the Cross. The paintings are rather provincial, and the depicted figures of the executioners are dressed in Renaissance outfits.

The predella at the bottom of the Dębno altarpiece may have been built around 1700. It mimics the form of a late-Gothic element of the altar, but has a space for a tabernacle, which was not included in the late medieval structure. The predella is decorated with painted columns and arches, located above half-figures of two saintly bishops: Nicholas (described as ST NI, or Nicolaus) and Adalbert (described as ST AD, or Adalbertus). Contrary to what some publications say, the predella does not include a depiction of St. Stanislaus.